The future looks brighter than it has in a long time for commercial leasing and development in downtown Montreal, panelists agreed during a discussion on the state of the city’s office market. 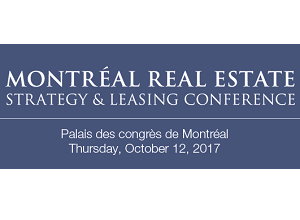 “I think next year is going to continue to be strong. Downtown has never been stronger,” says Robert Giglio, vice-president, leasing at Bentall Kennedy. “People are interested in the city. We’ve never had more visits from Torontonians looking at buildings and wanting to invest their money here.”

He was speaking at the Montreal Real Estate Strategy and Leasing Conference on Oct. 12.

Things look good for downtown office space and there are no particular reasons to expect a slowdown, says Philip Belliard, senior director, leasing at GWL Realty Advisors. While infrastructure work may cause a few blips, “everything is moving in the right direction for Montreal as a whole,” in terms of confidence, economic growth and employment.

Developers have adopted a more conservative approach and “are staying in line and not popping up buildings when they’re not necessary,” Belliard says.

That said, he thinks a new office development for the downtown will likely be announced in the next 12 to 18 months because there are no large blocks of vacant space available. “That’ll prompt somebody to take the lead.”

This has been a “great” year for GWL, Belliard adds, kicking off with the acquisition of 1350 and 1360 René Lévesque Blvd. W. (see Benchmark office deal closes in downtown Montreal). The buildings are 530,000 square feet and 397,000 square feet, respectively.

GWL also completed the sale and leaseback of the 375,000-square-foot SNC Lavalin building at 455 René Lévesque. Together, those moves have added almost 1.5 million square feet to its portfolio.

Jean Laurin, president and CEO of Newmark Knight Frank Devencore, continued in an optimistic vein, noting the infrastructure work, residential and commercial development in the city have been “exceptional.”

“I’ve rarely seen Montreal have the growth like we’re in right now.”

He does not see anything changing that situation although the fate of NAFTA negotiations could have some negative impact.

Laurin notes that since much of the space for development on René Lévesque has been taken up by condos and hotels, new downtown office development will likely have to take place in the south.

Belliard says the development of residential condo buildings on René Lévesque has helped with office tenant retention given the concept of live, work and play is one of the biggest drivers of decision-making.

However, while residential development in an area that has traditionally been home to commercial development has proven to be popular with baby boomers and millennials, it has not taken off with Gen Xers and their families.

Brokers on the panel noted  that while downtown is doing well, it is often tough to find takers in the suburban markets of St. Laurent and Laval.

The expansive St. Laurent market, which stretches some 16 kilometres along the Trans-Canada Highway, is “a hard nut to crack,” Beillard says. There were 52 options for tenants looking for between 4,000 and 8,000 square feet in St. Laurent the last time he checked.

“It comes down to, ‘How do you make sure your employees can get to your buildings?’ We all have buildings that are in good shape, that show well, that the tenants tend to stay at. It’s just trying to get them there.”

Belliard notes there has been a significant flight to quality of tenants moving from class-B to class-A properties “because they need to densify and modernize.” As a result, class-B building owners need to reinvest to retain tenants, often in areas tenants can’t see but definitely can feel – from HVAC systems to improved mechanics in the elevators.

“Definitely, location is not the only thing that counts anymore. You have to be ahead of the curve. There are some landlords in Montreal that have ignored this reality.”

Giglio says commercial landlords who are currently finding it difficult to lease their spaces have to reposition their buildings to provide upgraded and additional services, such as better Wi-Fi, to accommodate a growing millennial workforce.