GWL Realty Advisors and Investors Group have finalized their joint purchase of 1350-1360 René-Lévesque West in downtown Montreal from KanAm Grund Group for $429 million. 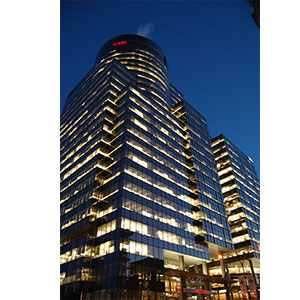 “To my knowledge, it is the largest real estate transaction in Quebec in 2016,” said Scott Speirs, executive vice-president of Jones Lang LaSalle, which executed the transaction on behalf of Germany’s KanAm Grund Group, which has handled transaction volume of about $30 billion (U.S.) since it was established in 2000.

“The sale of 1350-1360 René-Lévesque represents the first unencumbered 100-per cent interest of a major office tower in the Montreal downtown core in many years. It sets a new benchmark cap rate for office investment in Montreal and demonstrates the increasing appetite from domestic and international investors for large-scale core assets in the Quebec market.”

Speirs added that there was “strong interest from both domestic and international investors” and that it took less than 90 days from when the property was first marketed until the deal closed.

The complex was completed in 2004 and is 87 per cent occupied with long-term leases. Major tenants include CGI, TD Bank, Laurentian Bank of Canada and Vigilant Global. GWL Realty Advisors is the leasing and property manager for 1350-1360 René-Lévesque West.

The new owners have no renovation or redevelopment plans for the class-A office complex set within two connected buildings of 25 storeys and 530,000 square feet and 17 storeys and 430,000 square feet respectively. The towers are connected by a double height atrium on the main level that provides reception areas and a 325-seat food court (and adjacent open-air terrace) with vendors including Café Depot, Muffin Plus, Les Grillades du Cedre, Sun Sushi and Rotisserie Pollo.

Additional tenant amenities include a convenience store, The UPS Store and bank branches for two of the anchor tenants.

The infrastructure of the complex has been upgraded and recommissioned since its construction. With a LEED Silver Existing Buildings: Operations & Maintenance rating and BOMA BEST Gold certification, 1350-1360 René-Lévesque West is now one the most technically advanced and efficient office spaces in Montreal.

The complex is conveniently located close to both the Lucien L’Allier subway station and the Lucien L’Allier AMT rail station. It’s also serviced by nine bus routes and is adjacent to the entrance and exit to Ville-Marie Highway (720). It has 508 underground parking spaces on five levels, including priority spaces for hybrid and electric vehicles, and 100 additional spaces reserved for bicycles.