Betting heavily on the continued growth of the Oakville market and the GTA in general, Fengate Capital Management recently unveiled real estate deals that combined with prior acquisitions, give it 47 acres of contiguous lands with over 1.1 kilometres of unobstructed highway exposure. 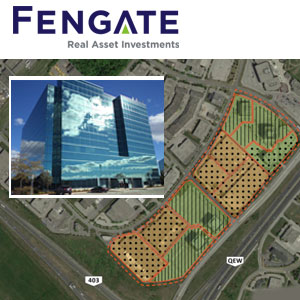 Fengate’s latest buy is made up of six industrial and office buildings with a total of 530,000 square feet on 35 acres located at QEW and Highway 403 in Oakville.

It began assembling properties and land in the Oakville node with the purchase of four office buildings at the start of 2014.

“The major attraction is its proximity to Toronto,” said John Bartkiw, Fengate’s managing director of real estate. “There are a lot of head offices around here and it has really come into its own given the 403-QEW.  It has great transportation access.

Oakville has something else going for it over places closer to the Toronto core: “Probably one of the biggest attractions is it is not as expensive as having downtown office space.”

Development in the future

Fengate did not create its Oakville node with an eye to immediate redevelopment, but Bartkiw does see it as a possibility down the road. “Our plan obviously is to seek long-term tenancies with our tenants. There is no redevelopment plan.

“What is nice about it is that when the area develops there is certainly an office node here, and going forward we will have options. If there is more demand as the leases expire, possibly 10 years down the road, we can build more office. We can do flex (office) and there may be more retail.

“We just have options going forward controlling all of this. But for now we know it is great real estate with all the highway frontage.”

The most recent acquisitions in Oakville include industrial buildings located at 2879, 2905, 2951, 2965 Bristol Circle and 2351 Upper Middle Road East, and an office building at 2010 Winston Park Drive (the office building shown in the image).

Fengate would not put a price tag on the Oakville property – either how much it has paid to assemble the industrial and office over the past year or what it might be worth if sold as a package.

The industrial properties are fully leased while the office buildings are doing better than average for suburban office, Fengate’s director of real estate said.

“The suburban office market has faced some challenges but we have noticed a difference in the Oakville office market and stronger occupancy within our five buildings than the average.”

Fengate’s Oakville industrial-office node was purchased for a particular client and is owned within one investment fund.

Fengate, with more than $1 billion in real estate assets under management, has a high net worth fund with multiple investors that owns real estate in the GTA West area in all asset classes.  It also has two mandates with other investor groups.

Fengate’s secret sauce? “We have generated good returns for our clients.”

While the GTA West will remain an area of concentration for the Oakville-based firm.  It currently has two development projects one that is a flex office building in the works in the municipality.

It has also acquired lands in the Vaughan, Ont. area in a development partnership to create a large industrial project.

“We are trying to move ourselves out of the GTA West area and have a little broader diversification,” said Bartkiw.

Beyond its Oakville office and industrial focus, Fengate also specializes in infrastructure investment. With more than $2 billion in assets under management (real estate and infrastructure combined), it has “significant experience” in public-private partnerships, independent power projects and operating infrastructure assets and has been active across North America, Europe and Australia.

This month Fengate announced the purchase of a 25% equity interest in a 120 megawatt wind power project in the U.S. and an equity investment in a steam-electricity cogeneration plan in Western Australia.