Going against the grain works for Wesgroup

Most developers take the same approach to mixed-use developments – build the residential and the new homeowners will bring in the retail. Vancouver-based developer Wesgroup decided to take the opposite approach – with much risk – and it worked. 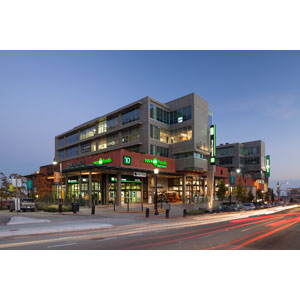 For seven years, Wesgroup built and developed the retail and commercial heart of the old Labatt’s Brewery site in New Westminster. They brought in Starbuck’s, Save-On-Foods, Brown’s Social House, Shoppers Drug Mart, Kids and Company and TransLink headquarters as well as many other office and retail users.

Then, just last year, they launched the first residential phase of homes and sales have been brisk. It’s Vancouver, after all, and condos and multi-family homes – especially transit-oriented developments – are selling like crazy.

But what makes this development different is most buyers came because of the existing and burgeoning retail village. They knew they were buying into an existing neighborhood where they wouldn’t have to drive to get groceries, go for dinner, go to the dentist or the bank or catch a yoga class.

It’s all already right there. That’s a big draw for buyers, especially in the suburbs where cars are normally essential and vibrant boutique retail villages are rare.

Another huge perk for buyers, of course, is that they won’t have to wait for amenities when they move in.

“We delivered retail, including a grocery store, without a single residential unit built,” says David Wesik, VP of Corporate Development at Wesgroup. “We decided to take a financial hit early in order to provide the community with the services it needed.

“That’s very rare for mixed use developments. But we believe in this neighborhood and think it’s got a promising future ahead.”

All 15,000 square feet were snapped up when Brewery District started leasing and selling office space.

TransLink and Transit Police signed a 20-year lease on 200,000 square feet for its eight-storey headquarters, and a number of doctors and other medical professionals, drawn by the A-class location and the close proximity to Royal Columbia Hospital, bought office space for above the Metro Vancouver average.

A third office building was sold to the 17,000-member Health Science Association.

According to Wesik, only 1,300 square feet of the 85,000 square feet remains vacant, startling in an area where retail vacancies are traditionally above 11 per cent. The net retail lease rate is approximately $35 per square foot, similar to Vancouver’s trendy Gastown or West Fourth Avenue.

Wesik credits a unique location and an “underserved” neighbourhood for the Brewery’s commercial success.

“It was a risk,” Wesik said. “Traditionally the residential would have been first out of the gate. But it was a strategic decision on our part to lead with the office and retail to build up the amenities in this area.”

With the TransLink headquarters, the medical offices and the retail, Brewery District has become a major employment hub in New Westminster and will have more than 2,500 daily workers at full build out. That is also propelling housing sales.

Other developers take note: Doing it backwards might just be the best forward-thinking strategy.