Greybrook Realty Partners Inc.  made headlines with the sale of a residential condominium site in October, one of the largest sales measured in dollars of its type in Toronto’s history.  The company however has an impressive pipeline of investments in property developments primarily in the GTA but also in Florida and Manhattan. 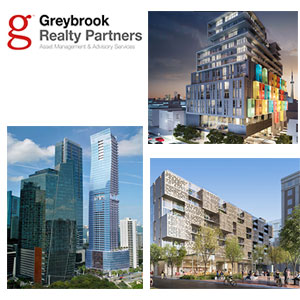 The Toronto-based company has about 5 million sq. ft. of highrise in the GTA under development currently.

Highlights include an eight-acre development in Toronto’s west end Junction area with Castlepoint that is 1.1 million sq. ft. of mixed used commercial, condo and townhouses; a townhouse development in Downsview; a luxury development at Avenue Rd. and Lawrence in partnership with Stafford Homes and a low-rise project in Markham, Ont.

“On the condo side, we only kind of focus on the downtown core, Yonge and Sheppard is as far north as we have ventured. But on the single family housing we have gone across to Oshawa, Markham, Woodbridge, Vaughn, New Tecumseh, Cambridge, Guelph, Hamilton.

“We will go across the greater Golden Horseshoe for ground related single family housing because that is practically the only place you can build it.”

The company is also working on two developments in Florida including a tower that is slated to be the tallest building south of Manhatten in Miami (over 90 storeys) and it is close to finalizing a deal in Fort Lauderdale to construct two rental towers of 1100 units and more than 1.5 million sq. ft.

Politis does not expect Toronto’s red-hot condo market to fall off anytime soon, based on immigration, demographics and soaring single family home prices.

“It is becoming more evident every day that there is a real gap in affordability between ground related housing so townhouses and homes, and condos.

“We seem to be living in an era where we are witnessing the Manhattenization of Toronto where the generations before us thought everyone should be able to afford a house and have a four-bedroom, three bath house and a driveway and a backyard. In most other major cities around the world that is unattainable, unaffordable, it doesn’t even exist.”

That is turning those without a single family home into condo buyers whether they like it or not, he said.

“You might make a couple hundred thousand a year in this city and still, if you want to live anywhere close, you still have to buy a condo based on affordability.”

Part one of this article Toronto condo site sells at the ‘right price’ was published in Property Biz Canada, November 3, 2016.