Greybrook Realty Partners Inc. had big plans for its four-acre parcel of land on Toronto’s waterfront at 215 Lake Shore Boulevard East but an offer from Chinese real estate Greenland Group (Canada) turned out to be too good to turn down. 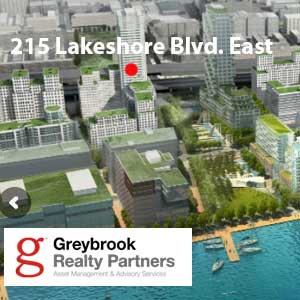 Image adapted from a rendering on the Greybrook Realty website.

Greenland Group, a Chinese state-owned real estate developer with over US$58 billion in assets and developments in major markets around the world, paid the developer more than $166-million for its four-acre share of the property. That represents a massive profit for Greybrook which purchased the site with partners Castlepoint Development Group and Cityzen Development Group for $60 million two years ago.

Greybrook said the deal which closed on October 13, 2016 represents one of the largest sales, measured in total dollars, of a residential condominium development site in Toronto’s history.

“It’s a biggie,” said Peter Politis, Greybrook Realty Partners’ chief executive. “Both in terms of total dollars and just the sheer size of the actual development. It is about 1.5 million square feet.”

He believes the partnership’s ambitions attracted its foreign buyer. “They were looking for something of this scale, and quality based on location that would fit a global Fortune 500 company like Greenland.”

Greybrook owned the majority of four acres at the site.

A scarcity of land ready to go

Politis stressed that his company never had any plans to sell the site but noted “everything is for sale at the right price.”

An exploratory discussion with BMO Capital Markets this year led to an introduction to Greenland and events moved quickly after that.

“They were looking for something at this scale, we were open to the possibility and I guess from there came a deal. We didn’t sell it in the public market, we didn’t talk to any of the other guys who reached out to us, albeit some of them called me upset that we didn’t do that.”

He believes “Greenland is going to do very well, based on what they are paying on a per foot basis – it was an easy call for us – but I think they are going to do really well too.”

Greybrook originally valued the property at $90 million to $100 million so it was already ahead of the game before fetching a big premium from Greenland.

“With the scarcity of any land yet alone prime land like this at this stage of the development process which is more or less ready to go, that kind of land is priced at a premium.”

In the end, Greybrook decided to take the cash rather than spend the next five years on the waterfront development.

“We had the opportunity to make a meaningful amount of our originally projected return in two years instead of over seven years.”

Greybrook, along with its partners Castlepoint and Cityzen planned to develop two condo towers of 40 and 50 stories on the east, and a smaller third tower on the west side of the site.  The adjacent land south of the Property is a separate site owned and to be developed by Castlepoint, and was not included in the sale to Greenland.

“We had what we thought was a really unique design to incorporate those two towers into a phased development but really connect them. Now we are sitting on two awesome designs with nowhere to build them.”

Based on his discussions with Greenland, he expects a similarly ambitious development.

“Their M.O. is much more coming in and creating a feel, a design, a community. It is a lot easier to do that or more manageable to do that when you have the ability to design an entire community.

“It was almost one of their must-haves. If this was one tower I don’t think we would have been able to do a deal with them. They have big ideas of what they want to do.”

The project at 215 Lake Shore will not be Greenland’s first stab at Toronto development. It is currently under construction at 355 King St. West with its King Blue Condos project. Slated for completion in 2018, it features two towers of 48 and 44 storeys and podiums of various heights that frame a courtyard bordered by the lobbies of the residential towers and the Theatre Museum Canada.

“They have 25 or 30 full-time active people here,” said Politis. “It is not coming out of Shanghai, they have boots on the ground here on the development side.”