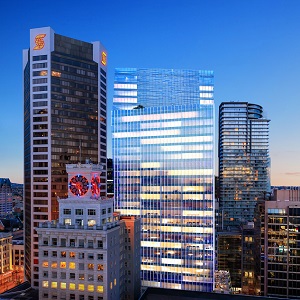 The tower will replace a parkade building and is expected to be complete in 2021. It will lead the next wave of downtown Vancouver office projects that could include another eight or more developments of varying size over the next four years.

“We see the market having limited supply,” he told RENX at the ceremony. “There is a lot of tenants looking around.”

That said, the tower is being built on spec, without a host of pre-arranged tenants.

“To get a building off the ground you sometimes have to go on spec,” he said. “We believe this is a good time to go on spec because of the nature of the market.

“There is a shift moving to the east (of downtown). A lot of the TAMI (Technology, Advertising, Media and Information) tenants want to be here. So, we think a lot of the things are falling into place.”

He said Vancouver, despite robust office demand that has the downtown vacancy rate flirting with four per cent, remains a market driven by smaller firms looking for smaller spaces.

He said future tenants of the building will likely include tech firms, law firms and other financial service companies.

“We don’t want it to be all one industry,” he said. “When that industry is in trouble, they’re all in trouble. We want a diversified rent roll, a whole bunch of different tenants.”

Finkbeiner said GWLRA maintains a very conservative approach with its investments. GWLRA has $6 billion in completed, active and pre-development projects across Canada and a total of $12 billion in its overall asset portfolio.

GWLRA and HOOPP bought the complex from Grosvenor in 2001. In 2009, the structure became connected to the underground Canada Line rail transit extension.

HOOPP represents 320,000 nurses and other healthcare professionals as part of its pension plan, said Stephen Taylor, vice-president of real estate for HOOPP.

“We have been involved in Vancouver Centre for over 15 years now and we’re very excited to kick off this new phase in this development,” he told the gathering of about 50 invitees, including staff, property brokers and Vancouver’s former chief city planner Brian Jackson.

Taylor said HOOPP has more than $1.7 billion invested in real estate across B.C.

“Be proud you made it through our development permit process,” Vancouver councillor Raymond Louie said, earning a chuckle from the audience. “Frankly I can’t remember this one at public hearing for some reason, so it must have been a very smooth process. Congratulations on that.

“We are continuing to encourage people coming from all over the world to do business, to live in our city and we’re doing our best to speed up those permit processes.

“All you have heard of this big company that might be coming to town,” he said, clearly referring to Amazon and its high-profile search for a secondary North American headquarters. “This will help.”

After the ceremony, Louie said he’s hopeful the tower will become home to more high tech and green tech companies.

“We’ve attempted to create the environment where new and innovative design is part of the thinking of our city,” he told RENX. “Certainly, Vancouver is a market that punches well above its weight in terms of its reach and international reputation.

“We have been putting pieces like this in place to make that happen.”