Multi-family rental building sales in Greater Vancouver rose by 47 per cent to 181 transactions and the dollar volume soared by 99 per cent to $1.55 billion last year in comparison to 2014. 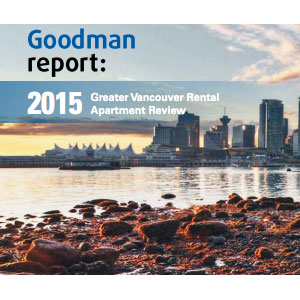 Things could heat up even more in the coming 11 months.

“It wouldn’t surprise me if we were above 200 buildings and we could come close to the $2 billion range,” said David Goodman, a partner with his son Mark in HQ Commercial and the Goodman Report, who just published a review of the market. “The demand is very, very deep and I don’t see any letup.”

Vancouver’s allure has driven up apartment building prices as investment money chases properties in both the City of Vancouver and its surrounding suburbs.

“The outlying areas, even Langley, have seen tremendous activity,” said Goodman. “The overall demand to either buy or rent in the Lower Mainland is driving all the neighbourhoods.”

Vancouver’s West End and Marpole communities are experiencing densification and properties are being purchased for redevelopment and infill, which accounted for their major increases in average suite values.

Goodman anticipates plenty of activity along Vancouver’s West Broadway corridor, as the future mass transit system extension will benefit the communities of South Granville and Kitsilano.

“It’s become a more forward-thinking community and they’re encouraging rentals,” said Goodman, adding the City of Vancouver and several other municipalities aren’t taking the same approach, contributing to the lack of affordable housing in the Lower Mainland.

Eighty-one per cent of Vancouver’s rental buildings are more than 35 years old, and many are showing their age. Meanwhile, the Metro Vancouver 2040: Shaping our Future regional growth strategy forecasts 6,500 rental housing units will be required annually over the next 10 years.

There were 834 newly created or renovated units added to the rental stock in 2015 – the largest increase recorded since 1986 – yet supply isn’t keeping up with demand. Purpose-built apartment vacancy rates in the Vancouver Census Metropolitan Area declined to 0.8 per cent in 2015 from one per cent in 2014.

The estimated rent increase was 3.9 per cent, considerably higher than the allowable threshold of 2.5 per cent as set by the Residential Tenancy Branch. The discrepancy was driven by landlords being able to charge higher rents upon the turnover of suites.

A moratorium on the demolition of rentals in certain zones, a bureaucratic process that can mean three- to four-year waits for approvals for the Rental 100 Program for new rental housing developments, an unwillingness to budge on long-entrenched zero-rate-of-change guidelines for rental and market housing redevelopment, and unevenly and unfairly distributed concessions on densification are among Goodman’s complaints with municipal policies, which he said have created a rental housing mess.

“Our municipalities cannot readily accept or concede that we need some serious supply, and I don’t see that happening. If it happens, it’s going to happen slowly and evolve over years and years and it’s not going to suddenly make us more affordable,” he said.

“The municipalities are very tight-fisted when it comes to creating opportunities that are conducive to rental housing.”

Goodman said building rental properties involves little risk, they’re easy to finance and they’re in demand by both tenants and investors. While land and construction costs are higher in Vancouver than in Toronto, rents are around par for new apartment buildings.

“The problem is that it takes two to four years of hard negotiations with the City, which appears to have a deep-rooted resentment about the development community doing well,” said Goodman.

“We’ve seen examples where they nickel and dime the developers and hold them up for months on end over minutiae. They reduce the height and density and tell you to move a wall or increase setbacks. For the most part, they’re working overtime to justify their existence instead of allowing the flow of housing to be less controlled.”

Chinese investors are becoming an increasingly big part of the overall Vancouver real estate market, though still not so much in the apartment sector.

“There are too many locals who are very sophisticated and nimble and agile who can move quickly and understand the nuances of the market and the Residential Tenancy Act and what each suburb represents,” said Goodman.

“It’s all well and good to come in with $100 million and want to buy, but you have to be here for a couple of years to let it soak in so you understand the dynamics of the rental market.”