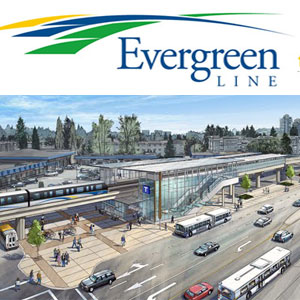 The $1.43-billion, 11-kilometre SkyTrain extension opened on Dec. 2, connecting Coquitlam City Centre through Port Moody to Burnaby’s Lougheed Town Centre in a 15-minute trip. That line now offers a mass-transit link between Downtown Vancouver and several points in the Tri-Cities area not previously served by the West Coast Express train line. The Tri-Cities region includes the cities of Coquitlam, Port Coquitlam and Port Moody and has about 250,000 residents.

TransLink, the regional transit authority, says the line is expected to carry about 70,000 passengers a day by 2021.

The opening of the line should motivate municipal governments along the line to support higher-density projects around the Evergreen Line stations, said David Taylor, a vice-president with Colliers International in Vancouver.

He said Coquitlam lawmakers have been preparing for years at the Burquitlam Station, adjusting zoning bylaws to allow for residential towers that climb above 20 storeys. “We’re seeing towers in and around the Burquitlam station, and the fact that the City of Port Moody is now talking about pretty significant towers around the Moody Centre station, I think that’s probably the biggest impact,” he told Property Biz Canada.

He said Port Moody currently allows for a maximum of 12 storeys in a three block section around Moody Centre station, but is currently revisiting that policy because developers are saying that mid-rise development in the area isn’t economically viable.

Port Moody is now reviewing various scenarios that could eventually allow for towers reaching 40-storeys in the area.

“You’ve got a ton more interest now from developers that are looking at these areas as being more accessible, and more in demand from condo buyers,” Taylor said.

Most of the growth so far has taken place in at the Burquitlam station in Coquitlam, agreed Michael Buchan, a vice-president with Avison Young in Vancouver.

“There are probably 15-plus projects that are either in a rezoning stage, development application stage, or they’re actually in the ground digging in the Burquitlam area,” he said.

In recent months, a more diverse group of developers have been poking around the area, he said. “Groups that aren’t your typical developers or typical buyers of these types of properties are asking and inquiring, asking: should we be looking at buying or investing in and around where the rapid transit lines are?”

A more dramatic round of development will likely follow last week’s opening of the line. “You’re going to see more encouragement for developers to go in and take positions around the stations that have not already done so,” Buchan said.

“Some of the developers who had bought land but hadn’t gone through the rezoning process or put the wheels in motion for development applications; you’ll start to see them fast-track that little bit more too,” Buchan said.

He said the line will make the Tri-Cities more enticing to people who want to work in Vancouver but don’t want to live there. “It’s creating new vibrant communities and its attracting new families and new people into these areas.”

Beedie Development Group agrees. The company is set to open Crown, a 26-storey condo tower, in late spring or early summer, 2017. It’s located about 200 metres from the Burquitlam station.

“The success of the Burquitlam neighbourhood… is directly due to the Evergreen Line coming,” said Curtis Neeser, Beedie’s director of residential development.

“There are other projects in the neighbourhood that are close to completing also, and not just high-rise, but mixed forms of housing,” he said. “I do think [the Evergreen Line] is a game changer. It really opens up the accessibility to these neighbourhoods.”

He said they heard from so many families who wanted to relocate to Coquitlam during their marketing campaign that they redesigned the building to include more three-bedroom units.

“We have 18 three-bedroom units, so 10% of the building is three-bedroom, which is higher than typical,” Neeser said. “That’s a direct result of the Evergreen Line.”

Coquitlam Mayor Richard Stewart said his city has been preparing for the opening of the line for several years by increasing its density allowances at Burquitlam and Coquitlam Central stations.