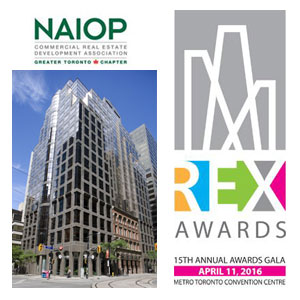 Edward Sorbara received the Lifetime Achievement Award for his role as a principal with the Sorbara Group of Companies, an integrated real estate, planning, development, construction, investment and management firm with a history dating back more than 65 years in Ontario. The company’s investment portfolio includes high-rise apartments, high-rise and low-rise office and industrial buildings, and commercial development.

Sorbara served a term as president of the Urban Development Institute of Ontario and was a longstanding member of the Society of Industrial and Office Realtors and the NAIOP. He served on the founding steering committee of the Toronto City Summit Alliance, where he co-chaired the Affordable Housing Coalition.

Brian Curtner, a founding principal of Quadrangle Architects, was posthumously honoured with the Directors’ Award after passing away last August at 64. Quadrangle opened in 1986 and, since then, Curtner helped build it to the point where it has a staff of 140 and a portfolio of projects throughout Toronto, across Canada and internationally.

Curtner was recognized for designs that included the award-winning BMW showroom at the foot of the Don Valley Parkway that converted a vacant office building into a six-storey showroom and Corus Entertainment’s state-of-the-art headquarters and broadcast facilities on Toronto’s waterfront. He also spearheaded the firm’s expansion internationally and undertook projects in Dubai and China.

Curtner was a graduate of the Architectural Association School of Architecture in London. He was licensed to practise in eight Canadian provinces and was elected to the College of Fellows of the Royal Architectural Institute of Canada and the Simcoe chapter of Lambda Alpha International. He was also active in and served on the boards of numerous professional associations, including the board of directors of the NAIOP’s Greater Toronto chapter.

George Przybylowski, vice-president of the real estate and construction exposition and conference team for Informa Canada, was chosen as the Community Service Award recipient. In this capacity, he leads the team that produces Canada’s largest expositions and conferences serving the building design, construction, real estate management and investment sectors. They include Construct Canada, PM Expo and The Real Estate Forums.

Przybylowski has served as a director of Rotary Cheshire Homes (the only barrier-free independent living residence for persons who have acquired deaf-blindness in the world), the Canadian Helen Keller Centre (the first skills training centre in Canada where individuals with deaf-blindness can upgrade or gain independent living skills) and the Don Valley Rotary Club, where he was a Paul Harris Fellow (Rotary’s highest recognition).

Przybylowski has been on the board of the Canadian Foundation for Physically Disabled Persons for some 30 years. He also served as a board member and vice-chair of Prostate Cancer Canada for eight years.

The Developing Leader Award is given to those 35 or under who’ve distinguished themselves in their professions and show great promise as future leaders of the commercial real estate industry. Two winners were chosen this year: Kyle Hanna of CBRE Limited and Noah Gordon of Menkes Developments Ltd.

REX Awards for projects recognize achievements in the office, industrial, retail and mixed-use real estate industry in Toronto and the surrounding region. The focus of the awards program is on results (quality and performance), skills (teamwork, collaboration, innovation and creativity) and values (community and environmental awareness).

Finalists were chosen in seven categories and the following projects were judged to be the best: