Ottawa can no longer be considered a city which is poised for growth. With a slate of major developments underway, plus several more in the pipeline, the nation’s capital is experiencing a near-unprecedented amount of real estate investment. 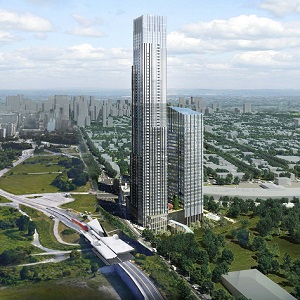 With two large infrastructure projects, plus a half-dozen or more major commercial, residential and mixed-use developments on the build, there is at least $5 billion worth of construction happening in Ottawa. Thanks to a focus on intensification, transit-oriented development, and the urban tech sector, developers are no longer shy about bringing projects to the city.

“I think (the growth) is coincidental with some key infrastructure timelines,” said Shawn Hamilton, senior vice-president and managing director of CBRE‘s Ottawa office. “Downsizing the federal government happened at a convenient time, right around 2008. The economic crisis created a little bit of a lull in our downtown core that allowed urban tech to flourish.”

CBRE recently issued a report ranking Ottawa 13th on its list of the top-50 North American technology markets, and the fastest-growing market for tech industry talent. The burgeoning growth sector, a soon-to-be-opened new LRT line through the downtown core, and significant improvements to its major east-west Hwy. 417, have virtually declared the city open for business.

“Coupled with some real sustainable growth happening across the city, not just downtown, the city is really pushing to take advantage of Ottawa’s star, which is rising,” said Hamilton.

So, what is all the fuss about in Ottawa? RENX has compiled a list of seven of the largest, most significant projects ranging from infrastructure, to industrial, to residential, commercial and mixed-use.

The first stage of Ottawa’s expanded light rail transit, the Confederation Line, has faced multiple delays but is currently set to open early in 2019. The government-funded, $2-billion project features 13 stations along a 12.5-kilometre route, including a 2.5-kilometre downtown tunnel.

While the first phase services mainly East Ottawa and the downtown to Westboro, all three governments have committed funding to Phase 2. The next segment includes a link to the south end and the Ottawa airport, and pushes west to Bells Corners. When completed, the system will have 64 kilometres of rails and 42 stations.

This activity has created a new focus on transit-oriented development. Previously undeveloped areas along the Confederation Line will be just seven to 10 minutes from the downtown core, increasing their attractiveness to developers.

Shovels are in the ground at this 37-acre, $1.5-billion development from Dream (DRM-T) and Theia Partners. Downtown waterfront development has been rare due to the large amount of public space as well as existing buildings, but Zibi changes that by creating a live, work and play environment astride the Chaudière Falls.

The area was mainly industrial for well over a century. For decades a hulking, 250-metre Domtar mill building essentially separated the Gatineau side of the National Capital Region from that section of the Ottawa River. To help reclaim the waterfront, the building is being demolished, turning a former brownfields site into a sustainable waterfront development.

Trinity Centre is also part of a city commitment to further intensify its urban areas. The project, comprised of three towers, will include a 65-storey building which will be the tallest in the city (doubling the height of Minto’s existing 32-storey Metropole in Westboro).

It sits on 3.6 acres of land, and will feature residential, retail and commercial, and office components.

Coming in at 45 storeys, Claridge Icon was one of the first projects to benefit from city council’s willingness to move upwards. Once completed in 2020, the condominium project is designed to appeal to millennials, especially a new generation of workers in the urban tech industry.

Ottawa tech is typically thought of as a being centred around suburban Kanata, but the new wave of companies such as Shopify, Survey Monkey and Klipfolio are firmly established downtown.

The Hariri Pontarini-designed Claridge Icon is located at the intersection of Preston Street and Carling Avenue, steps from an existing Trillium Line LRT stop. It is sandwiched between Ottawa’s dynamic Little Italy and the picturesque Dow’s Lake recreation area and Rideau Canal.

Amazon (AMZN-Q) is building a million-square-foot fulfillment centre which will create upwards of 700 jobs. The project is estimated to cost between $100 and $200 million, though Amazon has not provided financial specifics.

Property owner and builder Broccolini has already broken ground at the site on Boundary Rd., near Highway 417. The location is significant because it is in East Ottawa, which has lagged in growth during recent years. Office vacancy rates, at more than 20 per cent, are significantly higher than any other market in the city.

The combination of improved transit and the arrival of Amazon could be catalysts for the area. Traditionally, most of Ottawa’s industrial development has been inside the city’s green belt, but there is little space remaining there for large developments.

This could also be a factor pushing more growth to the East.

As the city’s main East-West thoroughfare, access to Highway 417 is an important factor for many developers considering building in Ottawa.

With funding from both the federal and provincial governments, about $100 million is being committed to widen the 417 from six to eight lanes through the downtown.

E-commerce giant Shopify (SHOP-T) has outgrown its the Elgin Street headquarters in less than a decade. The company effectively tripled its Ottawa office space by signing a lease for the Export Development Corporation’s 400,000-square-foot former headquarters on Laurier Avenue.

That makes Shopify the largest private sector tenant in the area.

Shopify has already begin fitting up Floors Two through Six. The company plans to continue the work, and the move, in stages during the next few years. It expects to employ nearly 3,000 people in Ottawa’s downtown by 2021.

What it all means

The projects are all pieces of the same economic puzzle, feeding off each other and fuelling further growth.

“We have a city government that is forward-looking and is able to connect the dots and see what the growth charts could be,” Hamilton said. “The fact that the city had the courage to put LRT in shows that the municipal government is in tune with the city.”

Hamilton, who has three decades worth of experience in Ottawa’s commercial real estate sector, said this is an all-but-unprecedented time.

“I think the city has been good at recognizing . . . that Ottawa has all the key elements to grow for business. They just needed to give certain elements a nudge so they could service the type of growth that we need.

“The city was able to read the tea leaves and position Ottawa to take advantage of growth.”