The secret to Oxford Properties Group’s success is patience. 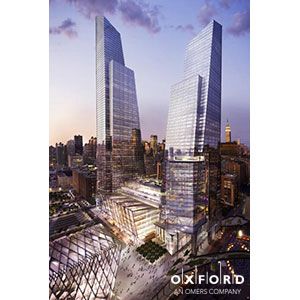 Perhaps that comes with being a giant real estate company, owned by an even more massive pension fund. The long view is a necessity rather than a luxury.

That reality was on display at the RealCapital conference closing executive panel in Toronto last week. It featured North American executives talking about their projects, prospects and political projections.

Not surprisingly, Anglo-American political eruptions, namely Brexit and U.S. President Donald Trump, were the subject of speculation, forecasts and some dark humour.

Few Canadian real estate outfits have more of an interest in the Brexit and Trump effects than does Oxford.

As Blake Hutcheson, president and chief executive of Oxford Properties Group, explained, the decision to strike out into the U.S. and U.K. as things brightened after the 2008-09 recession made sense given the shared language, familiar culture, stability and rule of law in those countries.

“Then 2016 comes along and so the question is do you then turn around and start to invest in these other 198 countries because they may be less risky than the two we are betting on?”

You can probably guess his answer.

“There is probably still more risk in the other 198 than the two we have so we are staying focused.”

Oxford is not walking away from a major investment in resources and people (about 65 Oxford people in the U.S. and another 35 in London and Paris).

Hutcheson reminded the audience Canada had its own proto-populist political version of Trump in the form of former Toronto mayor Rob Ford.

“This city endured four years of Mr. Ford being mayor and we had $9 billion worth of real estate when he came in and it was worth $10 billion when he left. It was noisy, but the world didn’t change.”

Oxford has a similar ride-it-out philosophy with the latest round of voter upset and the noisy politics it engenders.

Not about to deviate from current plan

“We are just trying to see through this cycle in the U.S. and the U.K. and elsewhere. We are not deviating from our current plan; we fundamentally believe it to be the right one.

“We don’t think because what happened in the U.K. is going to make Brazil any safer or Mexico any safer to invest.”

The day of the forum, Oxford’s philosophy bore some fruit with the report the company and a U.K. partner sold the joint-owned Leadenhall Building to a Chinese buyer for US$1.42 billion.

The Oxford chief added Brexit has made Europe chaotic and London more powerful and more of a magnet for foreign capital as investors view it as the ultimate winner of a political split with the continent.

In the U.S., Oxford’s focus is on Boston (“the Eastern seaboard tech capital of America”), Washington (where “office space goes up when legislation goes” and where the company is building a new spec tower) as well as in New York.

Despite its scale – 18 million square feet of commercial and residential space that will be the largest private real estate development in U.S. history – the project is relatively risk-free for Oxford.

“We bring in partners for everything,” said Hutcheson. “So every single square inch is financed and at this point, 92 per cent of the seven buildings under construction . . . is spoken for.”

With the success of the Hudson Yards development seemingly assured, don’t look for Oxford to play small ball when it comes to future projects.

During the panel Hutcheson and other executives said new development trumps buying existing properties when it comes to potential returns.

Oxford intends to use its resources and financial backing from the OMERS pension fund to keep it in the development big leagues.

“We look for bigger, more complicated transactions where we deploy more capital, bring in more partners when we want to, and use the expertise that we have to do the things that others can’t do. . .  And presumably when you do that you get higher yields.”

Consider Hudson Yards Oxford’s post-grad development degree. “Hudson Yards has been an unbelievable opportunity for us to go to school.”

Learn about Oxford Properties plan for the Toronto Convention Centre.