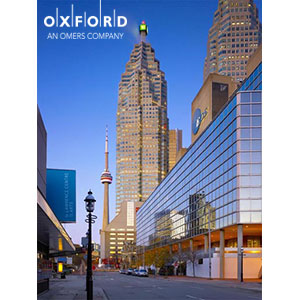 Image of Toronto Convention Centre on Front St. from the Oxford Properties website.

The north building squats over much of the so-called “Oxford Mile” which runs between the Rogers Centre and Citibank Building.

That prompted panel moderator and RioCan chief financial officer Cynthia Devine to quip “Blake . . . could we get the heat turned up in the Metro Convention Centre?”

“We own the dirt,” not the building itself, Hutcheson replied.

Patience, Oxford’s greatest non balance sheet asset, will be tested if the company is to realize its vision for the under-utilized strip of Front St. land.

The time frame for replacing the tired old MTCC north building and filling up the vacant lands with development?

“We can see redeveloping this entire block”

“It is not going to be two years from now, we are hoping it will be between two and six, we can see redeveloping this entire block.”

The Oxford chief  is inspired by the $12.5 billion Hudson Yards development, 18 million square feet of commercial and residential space that will be the largest private real estate development in U.S. history.

“You could put spectacular retail along Front St. and then scale office, (residential) and the rest,” Hutcheson said. “This could be one of the biggest development sites in the country, which could be a 10-year project.”

Hutcheson noted Oxford has another big Toronto development project to keep it busy for the next while, a multi-million-square-foot. re-development with Canadian Tire as a partner at the southeast corner of Eglinton Ave. and Yonge St.

More about Oxford Properties from the RealCapital conference in Toronto.