Perceptive, GSK US ‘go against the grain’ in property hunt

Robert Kurlender says he has adopted a “perceptive approach to real estate investment” in which he aims to differentiate from the pack when acquiring industrial properties. 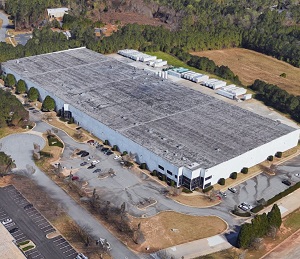 “My approach has been to go against the grain,” says Kurlender, the president of Montreal-based Perceptive Capital and GSK US Properties, privately held firms specializing in acquiring industrial, flex and refrigerated warehouse facilities throughout the U.S.

A case in point: GSK recently bought 16126 Alcovy Rd, a 302,062-square-foot distribution centre in Covington, Ga., near Atlanta, for “north of $6 million (US).” The tilt-wall facility has up to 26-foot clear heights, sits on 19 acres of land and is now known as the Alcovy Distribution Center.

Kurlender says the property was overlooked by numerous investors due to its location 56 kilometres from Atlanta, tight truck court, lack of loading and difficulty to finance given an in-place six-month rolling termination option.

“Saw a lot of solvable problems”

Kurlender said while several others passed on the deal, he “saw a lot of solvable problems that other people just saw as problems.”

He envisioned a facility in one of the lowest vacancy submarkets in the Atlanta area in which the truck court could be expanded and additional dock doors could be built.

The move paid off: He recently signed a lease with a new tenant – a major Fortune 500 food service company.

Kurlender got his start investing in U.S. industrial properties as managing director at Dalfen America Corp., a Montreal-headquartered, privately held firm with industrial properties throughout the U.S. and Canada. Shortly after the recession of 2008, Dalfen was one of the few Canadian firms buying property in the U.S.

“What we realized was industrial has really low operating costs, so you can carry the building longer,” he recalls. While industrial at the time “was not sexy, nowadays it’s quite popular. It’s probably one of the hottest asset classes with the transition from retail to e-commerce.”

More than $350 million in transactions

In 2015, Kurlender moved from Montreal to Dalfen’s office in Dallas. But only three months later, he decided to return to family and friends in Montreal and to take the plunge and start his own firm.

“I basically put my life savings on the line, took a big risk” and founded Perceptive Capital. “I didn’t have any particular deals tied up, but I did have the know-how . . . to build a platform, build relationships in the U.S., and a strong understanding of industrial. That’s how this whole thing started.”

Over the past 20 months, Perceptive has executed on more than $35 million of U.S.-based industrial property. The company now owns industrial facilities in sites ranging from Dallas to Livonia, Mich.

Perceptive Capital’s deals are carried out by Perceptive and limited partnerships involving various investors, while GSK is a joint venture between Perceptive and the principals of Montreal-based Cité Industrielle Lasalle, which owns more than 2.5 million square feet of industrial space in Canada.

Perceptive looks at holding assets long-term and concentrates on acquiring and repositioning quality industrial sites others tend to overlook for reasons such as age, location, financing challenges or transactional complexity.

GSK is committed to acquiring two million square feet of industrial product in the U.S., with a focus on the Atlanta market.

“Ideally, we want to focus on geographical regions, so we get economies of scale and operational efficiencies and Atlanta seems to be sort of the right place to do that,” Kurlender says.

The city is outperforming most American cities in economic and population growth and has almost 700 million square feet of industrial, “which is huge.” As well, “absorption is just through the roof.”

Aiming for $100 million worth of assets

In a few years, Kurlender would like the Perceptive and GSK banners to have $100 million worth of assets.

Kurlender is optimistic about the outlook for industrial properties, given the rapid growth of e-commerce. “Goods that are coming in need to be warehoused somewhere,” he notes.

If you can find well-located, functional industrial facilities at below replacement cost, you have an edge because a lot of buildings are obsolete and construction costs are continuously increasing, he says.