While it may not be garnering the headlines reserved for the Toronto and Vancouver real estate markets, Colliers International  senior vice-president Jean-Marc Dubé told attendees at the May 3 Land & Development Conference he’s “bullish on Montreal these days.” 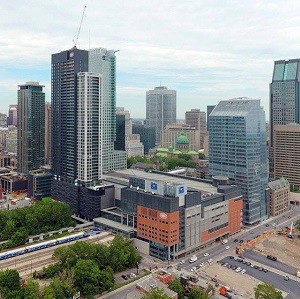 Dubé, among five real estate executives participating in a panel session at the Metro Toronto Convention Centre, cited the quick sellouts of Canderel’s Tour des Canadiens 1 and 2 condominium towers at the Bell Centre downtown as well as the commercial activity in the Mile-Ex district a few kilometres north of the core. (Editor’s note: This is part two of our look at recent commercial real estate deals in major Canadian markets. You can read part one, which focuses on Vancouver, by clicking this link)

“Rents will be $35 gross versus $55 gross downtown,” said Dubé of Mile-Ex. “It really offers what has become exceptionally important in Montreal, which is that live, work and play area that millennials want.”

Loft offices are hot in Montreal, due in large part to the city’s booming technology sector, and Mondev’s 110,000-square-foot Soffitta development in Mile-Ex is expected to capitalize on that.

Dubé said its land was priced at $180 per square foot, and it will feature retail at ground level and five floors of office space.

Dubé also discussed the Maison de Radio-Canada property on René-Lévesque Boulevard, a portion of which was purchased by Groupe Mach from the federal government.

The Groupe Mach portion of the land is just under a million square feet and will be turned into a development of just over three million square feet, according to Dubé, who added the existing 29-storey, 268,000-square-foot CBC/Radio-Canada tower will be retained.

“It needs to be gutted and redone on the inside. They’re planning on doing about 2,000 units of condos and townhouses on the site. There’s going to be some retail and office mixed-use development.

“They want to get into the ground as soon as possible so, as soon as it’s ratified by the government, we’re going to see construction going on there.”

A consortium led by Broccolini will build a new tower on the site, with CBC/Radio-Canada signing a 30-year lease to occupy it.

Construction is expected to begin this summer, with completion anticipated by 2020.

“We’re seeing some foreign buyers and a substantial increase in institutional buyers looking for development sites,” CBRE Canada senior VP Casey Gallagher said at the conference. “There are also groups that are speculating on land and putting assemblies together and getting sites that are fully zoned and then selling them to an end developer.”

CBRE’s signature transaction in 2016 was the sale of an assembled property at 480-494 Yonge St. acquired by Cresford Developments and KingSett Capital for a 38-storey, 451-unit condominium development branded as Halo Residences on Yonge.

The deal had a long closing before it became final in November for a price Gallagher said worked out to $190 per square foot buildable.

“Cresford went to the market with it and managed to achieve sales that were at the time record-setting, though they may sound moderate now,” said Gallagher. “Sales were for close to $900 per square foot.”

While robust pricing in the core is also pushing up prices in other parts of Toronto, Gallagher said it hasn’t dampened interest in such properties as:

• an historic 230,245-square-foot waterfront property on 5.3 acres of land at 351-369 Lake Shore Blvd. E., which was acquired in November by Dream Unlimited Corp. (DRM-T), Dream Hard Asset Alternatives Trust and Great Gulf;
• 1926 Lakeshore Blvd. W., a 1.1-acre site acquired in 2016 by Diamante Development Corporation for Mirabella Condos, a mixed-use development in pre-construction that will consist of two 35-storey towers with 760 residential units that will be built in two phases;
• and Bloorpointe, a 1.78-acre site at Bloor and Parliament streets that’s approved for a two-tower, 670,041-square-foot mixed-use development with a maximum height of 46 storeys, which was acquired by Tridel for $61 million.

Meanwhile, Cushman & Wakefield executive VP of capital markets Jeff Thomas said there’s been plenty of interest in a development opportunity at 25 Liberty St. in the Liberty Village neighbourhood that will feature 254,000 square feet of office space and 27,000 square feet of retail amenities when it’s available in the fourth quarter of 2019.

The whole building will have a free strata title so it can be split up and sold as office condos. Even at $800 a square foot, Thomas said there’s interest from businesses and non-profit groups with strong balance sheets that want to own 12,000 to 24,000 square feet of space.

“There’s new knowledge and interest from users who are understanding what good office condo product is.”