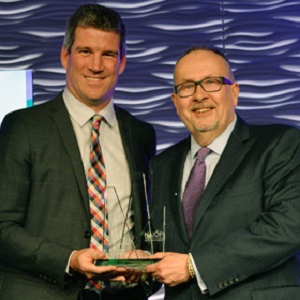 REX Awards recognize the achievements of people and projects.

Schulich School of Business professor Andre Kuzmicki received the Lifetime Achievement Award for a career that has blended real estate, academics and corporate governance. He’s taught real estate finance and investment since 1998 and was recently appointed director of Schulich’s Master of Real Estate and Infrastructure program, which launched in January.

Prior to joining Schulich, Kuzmicki spent 19 years with Prudential of America and managed its Canadian property portfolio, including the development of Consilium Place and 95 Wellington Street West.

Kuzmicki is a director of Chartwell Retirement Residences (CSH.UN-T) and Dorsay Development Corporation and a member of the advisory board of ASSESS+RE, a New York-based real estate tech startup. He previously served on the boards of Dream Unlimited (DRM-T), RealNet Canada Inc., Bentall Group, Artis REIT (AX.UN-T), Apex Corporation and Bentall Corporation.

Kuzmicki is a past president of the NAIOP Greater Toronto chapter and the founding chairperson of its real estate excellence awards program. He’s a NAIOP Distinguished Fellow and a member of the Urban Land Institute and the Pension Real Estate Association.

Young has received a Ruby Heart Award and two Heart and Soul Awards from the staff of Eva’s for his exemplary work and personal contributions. He’s also a past recipient of the Colliers President’s Community Award for his fundraising work on behalf of Habitat for Humanity.

Young has spent more than 30 years in real estate brokerage with Colliers, The Arnoldi Group, J.J. Barnicke and Knowlton Realty. He also has a longstanding relationship with NAIOP Greater Toronto and was chapter president in 2009.

NAIOP’s Developing Leader Award is given to young professionals aged 35 or under who’ve distinguished themselves in their professions and show great promise as future leaders of the commercial real estate industry. This year’s winners were Alexandra Khazzam of Dream Global REIT (DRG.UN-T) and Brendan Sullivan of CBRE.

REX Awards for projects recognize achievements in the office, industrial, retail and mixed-use real estate industry in Toronto and the surrounding region. Winners are chosen based on: results (quality and performance); skills (teamwork, collaboration, innovation and creativity); and values (community and environmental awareness).

Three finalists were named in seven categories. These projects were judged to be the best:

Industrial Lease of the Year:

Office Lease of the Year:

Industrial Development of the Year:

Office Development of the Year:

Investment Deal of the Year:

Retail/Mixed-Use Development of the Year:

Green Award of the Year: