Is there room for public art in industrial buildings?

It’s become an institution across Canada for many new residential developments to include public art components. These Community Amenity Contributions or CACs, mandated by the city, often lead to extraordinary permanent art like the rotating exhibit outside the Shangri-La Hotel in Vancouver and the permanent collection at the 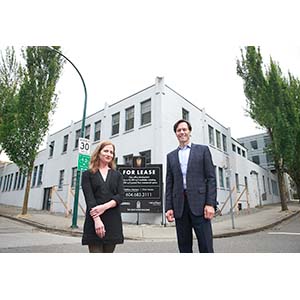 Vancouver’s PC Urban is setting out to change that. They’ve voluntarily commissioned two public installations for their upcoming industrial buildings and in doing so, have shaken the complacent development industry and called into question the difference between having to create the art and wanting to.

According to Jan Ballard, a fine art consultant working on more than 30 real estate public art projects in Vancouver, this is the first time a developer has initiated a voluntary public art commitment in the city. “Some developers will add money to their public art components, but I’ve never worked with a company that didn’t have a mandate. And not only did PC Urban do it voluntarily, they hired a selection committee to run a shortlist; they were shown 25 artists per project and then they chose three, each of whom were paid to do a concept proposal. It was a full blown effort.”

The result will be two public art installations transforming industrial buildings into something memorable and engaging. Something that will make people stop and think.

The idea to do something with public art outside of the city’s mandated program evolved from PC Urban’s experience with public art CAC’s in North Vancouver at their Barrow Street development. Like most developers, they looked at the mandate as a tax, something you just have to do. “Public art was forced upon us,” says principal Brent Sawchyn. “But when we unexpectedly started to get involved in the process of selection and curation and when the artist finished, the end result was so engaging and so spectacular, I realized that adding public art voluntarily – especially to industrial and office buildings – would create a more memorable experience for people passing by and for building users.”

All developers want to deliver an experience that engages people through buildings. They don’t want to create buildings that are sterile, antiseptic and forgettable. But PC Urban goes so far as to believe it’s their “responsibility” to the growth and future of the city to create public spaces that are destinations, places you want to spend time.

Mark Ashby, the artist behind Boids, the upcoming public art installation at IntraUrban, says he’s tried very hard to keep his art open-ended in its meaning. “I want to create an impactful visual experience, something eye catching, that people will notice and enjoy.”

Boids, Ashby’s 3D metal chevrons resembling birds in flight, will transform the non-descript concrete wall at IntraUrban into something vibrant and cool. Made from stainless steel sheet metal, the birds will reflect morning sunlight, cascade rainwater and cast shadows differently during the day. It will be a constantly changing view, one designed to make people think about flight as a metaphor for the small business owners inhabiting the space. “It captures the tenuousness of the entrepreneurial experience, as well as the exuberance of freedom,” says Ashby. 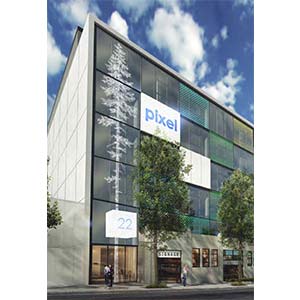 Rebecca Bayer, an artist who works on public art installations in Vancouver, will be creating Giant, a massive, snow-white, pixilated, half-tone tree, to be visible on the window of the new Lightworks building. It will not only reference the giant Douglas Firs that used to dominate this area, but it will also be the height of a 75 year old tree, the same age as the existing building.

“I want to honour the history of this place and raise awareness of what was,” she says. “Public art in Mount Pleasant has the power to mitigate the change between one era and the next. It allows different voices to be heard.”

Bayer believes in the impact public art can have on community: “It’s important for the city to have creativity as part of its infrastructure. It adds layers of interest and makes people more curious about their surroundings, the history of place and the potential of place. That awareness can really enhance people’s lives.”

If PC Urban can install public art on a little industrial building on Marine Drive, every developer can do it. It creates community and adds to the experience of a vibrant urban space. Many developers are passionate investors in art. Vancouver’s Audain family and Bob Rennie are just two examples. But according to Ballard, it’s unprecedented for a Vancouver developer to voluntarily invest in public art. It’s time to change that and to start embracing art as an essential element in building design.

“Maya Angelou has said: it’s not what you do. It’s not what you say. It’s how you make people feel,” says Sawchyn. “It’s our responsibility as designers and developers to leave the communities we build in with the best possible experience.”