Oxford, CPPIB build The Stack, Vancouver’s office of the future 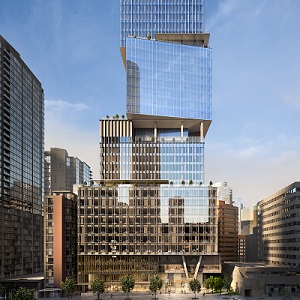 Oxford acquired the site from Amacon for $26 million in 2010. The previous building on the property had five levels of below-grade parking, four levels of above-grade parking and three storeys of office space.

“It was a nice little building the way it was and gave us a good little return, but our ambition was to build a trophy asset on that site,” said Oxford office vice-president Chuck We. “After we bought it, we were lucky enough to have the city designate it as a high building site.”

Oxford, CPPIB partners on The Stack

CPPIB has partnered on all of Oxford’s Vancouver assets, so We said it was “a natural fit” to team up when it began considering the redevelopment in 2015.

Toronto-based Oxford is the global real estate arm of OMERS, the defined benefit pension plan for Ontario’s municipal employees. Oxford manages more than $46 billion of real estate assets on behalf of its co-owners and investment partners, with a global portfolio spanning more than 60 million square feet.

Toronto-headquartered CPPIB is a professional investment management organization which invests the assets of the Canada Pension Plan not currently needed to pay pension, disability and survivor benefits. It’s one of the 10 largest retirement funds in the world, with assets of $356 billion at the end of its fiscal year on March 31.

Demolition has begun on the previous structure and The Stack is slated for completion in the first quarter of 2022. The AAA-office space will add much-needed supply to a tight Vancouver market, where the vacancy rate sat at 4.7 per cent in the second quarter.

The Stack was designed in a collaboration between Vancouver-based James K.M. Cheng Architects and Toronto-based Adamson Associates Architects. It features a unique climbing and twisting box design with six outdoor decks, a small park and a rooftop patio.

Potential tenants told Oxford they considered differentiated floorplates and decks to maximize views important features in a new office building. The stacked box design at The Stack should address those desires.

With pre-leases in place with EY, Blakes and DLA Piper, the top two boxes of The Stack are almost fully leased. The remaining bottom two boxes feature additional ceiling heights and larger floorplates ranging from 15,000 to 22,000 square feet. They’ve been designed to incorporate the needs of a wide range of tenants, including technology, digital media and creative firms.

The Stack was launched to the brokerage community last week and We said it’s already receiving plenty of interest.

“What we’re seeing with tech companies is that a lot of them don’t like to make decisions until they’re about two years out from an expansion, so our timing is lining up pretty well. We didn’t expect to see a lot of those come around until about 2020, two years before we complete. And we’re starting to get those calls now, which is good to see.”

We said lease rates will line up with new construction costs, which are escalating, and he expects them to be among the highest in Vancouver.

“But, we also believe that there’s a good value proposition with respect to the amenities and sustainability package, as well as the architecture and the views it will provide.”

The Stack’s focus on wellness

Those amenities will include the ability to open windows in the lowest box to allow for fresh air and create a connection with the outdoors, which is proven to boost employee wellness and productivity.

“We see that wellness is a massive desire for tenants,” said We. “A lot of employers that we’d like to reposition into new developments like this are doing it so they can keep their people engaged, interested and happy in their space.”

To encourage tenant wellness and cycling to work, The Stack will feature club-quality fitness and cycling facilities including: 350 bicycle stalls located at ground level; changing rooms and showers with towel service; and 460 lockers where users can store office clothes and other sundries along with their bikes.

The Stack will have 250 underground vehicle parking stalls as well as a dedicated drop-off zone to facilitate passenger delivery via ride-sharing providers and, in the future, autonomous vehicles.

The Stack will also include a 5,000-square-foot restaurant and a juice and coffee bar next to its fitness centre on the main floor.

“Food and beverage is an absolute must,” said We. “We want an active and animated area.”

GRESB assesses the sustainability of property investment organizations based on third-party review of their management, building certifications, stakeholder engagement and performance indicators, among other factors.

The Stack is targeting LEED Platinum status and is one of only two high-rise towers in Canada (along with Oxford’s 60-storey The HUB office development at 30 Bay St. in Toronto) to be part of the Canada Green Building Council’s Zero Carbon Building Pilot Program.

Low carbon construction materials will be used in building The Stack. All windows will have triple-pane glazing and there will be enhanced air tightness. On-site renewable energy will be incorporated along with a variety of energy- and water-saving features. The building will almost entirely be powered by electricity.

“In B.C., electricity is virtually carbon-free, which helps a lot,” said We.

The Stack will be “future-proofed” as part of its corporate partnership with Cisco — which develops, manufactures and sells networking hardware, telecommunications equipment and other technology services and products — and its “Smart and Connected Building” platform.

“A smart building gathers good data and operates much better and more efficiently,” said We.