The sale of a residential and commercial property in Surrey, B.C., marks the latest expansion of the booming Campbell Heights North Business Park. 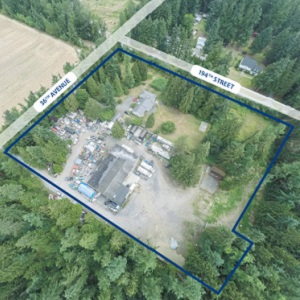 The lot, valued in 2017 at $5.49 million by BC Assessment, sits in a block of similar large acreages just to the east of the latest, northern phase of the Campbell Heights industrial zone.

“Even though we’re based in Vancouver, this will be our first Canadian industrial development,” said Ender Ilkay, Cedar Coast’s principal. “We like the area, we like what’s around it, and we saw it as a good opportunity for our proposed use.”

Cedar Coast was founded in 1995, and is owned by Ilkay and Willie Fisher. They have projects in B.C., Washington, Oregon and North Dakota.

“We have more than 2,500 housing units in holdings or development,” Ilkay said, noting 900 of the units are apartments.

Cedar Coast also has more than 300,000 square feet of industrial space in holdings or development, he said.

About 90 per cent of the company’s business is in the U.S., much of it in Oregon. He called Oregon a good fit for Cedar Coast’s development strategy because it offers better valuation opportunities and is close to Vancouver.

“We like Oregon,” Ilkay said. “We went to the U.S. first in 2011 after their housing crash and studied for a year the different markets and different cities, in terms of where to go and what to invest in.”

Cedar Coast’s industrial investment in Surrey sits near several other large residential properties, some of which are heavily wooded.

Campbell Heights North Business Park is the latest phase of the industrial zone, between 32nd and 40th Avenues. Developers have been building about 600,000 square feet of industrial space there annually; it is one of the last frontiers of undeveloped industrial land in the region.

Recent sales in the park have been fetching strong prices.

The vacancy rate in Campbell Heights is less than one per cent, said Garth White, a principal with Avison Young, the firm that listed the property for the seller.

“The strata industrial market has been very profitable,” White told RENX. “This is the first development to go through planning in the unserviced eastern portion of Campbell Heights.

“It’s a boatyard. There’s a residential house and a small warehouse that was utilized for boat repair and truck repair and stuff like that.”

Property to be rezoned

The residential property will require a rezoning, but once the site is serviced White said it will be easier for neighbouring landowners to connect.

“It’s a lot more difficult to develop, but because there is obviously a severe lack of land, we’re now seeing groups like Cedar Coast roll up their sleeves and take on that work to be able to bring product to market.”

Ilkay said the building will be divided into eight units of about 15,000 square feet each. Cedar Coast plans to break ground this year with completion expected in mid-2019. The company expects a hungry market for the spaces.

“The challenge for business(es) that need 15,000 square feet is, the market here is such that they can’t go and buy a piece of land and build (that kind of building),” Ilkay said. “That’s just not doable.”

He expects a mix of local businesses to snap up the units.

“It could be a lighting company, or a flooring company, or it could be distribution of some kind,” he said. “There is a plethora of uses that this could fit. It’s not geared to one specific niche industry.”

White has represented many of the original owners and residents in the Campbell Heights area.

“These are families and people who have lived there for their whole lives,” he said.

But, as the industrial development takes hold many of the residents are facing the decision of whether to cash out and leave. “A lot of these people who have bought and live in this area, that have a nice large acreage that’s quiet, are having a tough time replacing what they have nearby.

“All these properties will be redeveloped and with this site bringing the services to that part of Campbell Heights, you’re going to see that happen quite a bit faster,” White said.