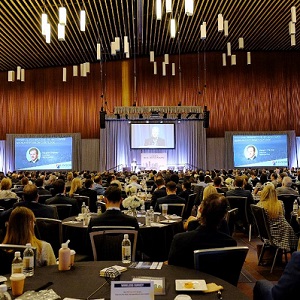 Port Coquitlam mayor and Metro Vancouver board of directors chair Greg Moore spoke during a discussion of the region’s affordability crisis at the Vancouver Real Estate Forum.

Metro Vancouver is the regional federation of 24 local authorities, including 22 municipalities. The organization plans and manages growth in the region via land use planning.

Moore said there are several reasons it costs so much to live in Metro Vancouver, but most pressing are the slow and ineffective public hearing process hindered by opponents to virtually every development proposal, and a shortage of skilled construction labour.

“Never does a large contingent of ‘yes’ come out to public hearings,” he told a packed ballroom of developers, realtors and other stakeholders. “It’s a public speaking contest for the ‘no’ side.”

He said mayors and councils struggle to get an accurate read on the true public mood for any given project when their chambers are always filled with opponents to density and development.

“I’ve got 50 angry people in my council chambers saying ‘this is a bad idea’, and I’ve got two people saying ‘it’s a good idea’. What would you do? You would probably say ‘I’m not sure this is a good idea,’ ” he said. “Is there a better way to go through a rezoning process that will help, I think, frankly speed up a lot of development side of the equation?”

There’s no apparent solution, he said, “but I think it’s something we need to have a serious conversation about.”

He challenged those in the room do more to push for thoughtful development during the permitting stage.

NIMBYism “kicking crap” out of politicians

Moore has said he will not seek re-election after serving as Port Coquitlam’s mayor since 2008.

Panel moderator Brian McCauley, the president and CEO of Concert Properties, said there is reason for optimism in the market.

“In my 30 years in this business, I’ve never seen the stars better aligned than they are today with all three levels of government focused on the issue of affordability,” he said.

Earlier this year, the B.C. government announced a 30-point housing plan, including $6 billion to build 114,000 affordable homes over the next 10 years.

The problem, however, is there are too few workers to build them, McCauley said.

“We all experience it on a daily basis,” he said. “The accelerated and elevated construction costs, the shortage of skilled trade labour and everything else.”

McCauley said meeting those goals will require double the manpower and output of the current regional building industry.

“We can’t ignore the fact that we just don’t have the capacity to build housing probably as fast as we need to do,” he said.

Moore noted other projects will also absorb a lot of skilled labour. Metro Vancouver’s capital plan also calls for about $7.5 billion in infrastructure investment over the next 10 years, not including provincial projects such as a planned new hospital in Vancouver.

“We need a lot of that skilled labour,” he said. “I think that’s one of the No. 1 issues that we need to be discussing.”

Panelist Anne McMullin, the president and CEO of the Urban Development Institute, said the bottom line is housing supply isn’t keeping pace with demand. Metro Vancouver remains about seven years from any notable affordability relief, given the current path of development and new government stimulus, she said.

“We do know that (the affordability problem) is a lack of supply,” she said, blasting “layers” of red tape at various levels of government, slow and expensive development permitting and high land costs as major causes.

She made no mention of Metro Vancouver’s struggle with real estate speculation.

“You can’t just say to a developer ‘go and build a whole bunch of three-bedroom units and townhomes and make them affordable,’ ” she said.

However, developers must also shoulder some of the blame.

“Sometimes, those projects that take a long time is because they’re crappy applications,” he said. “They come in with terrible designs, not meeting bylaws or zoning . . . not engaging the neighbourhood on what should be built there.

“They just come in with a narrow focus and want to build something. Those ones take a long time to get through the system.”