Call it a silent boom. While real estate has soared in other major Canadian cities over the last several years, Winnipeg has been quietly having a bull market of its own. 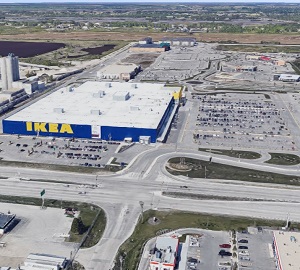 Rather than being fueled by a mix of local, national and international investors — often the case in Canada’s largest cities like Vancouver and Toronto — Manitoba’s growth has largely been driven by home-grown money.

“There is a ton of capital here and very sophisticated investors who have taken advantage of the fact that most institutional buyers view Winnipeg as a fly-over city.”

But companies such as Slate have been quietly putting money to work in the prairie city too — as was pointed out at the recent Winnipeg Real Estate Forum.

Among the discussions at the forum was a panel on investing in the city’s commercial real estate market, examining the impact of migratory capital.

Winnipeg off radar for some investors

All agreed Winnipeg has often been off the radar of outside investors, but those who have paid attention have been rewarded with steady yields and growth.

Taillieu pointed to sales in the commercial market averaging about $600 million annually. That’s not too shabby, but it’s still “a fraction of the volume you might see in Calgary and Edmonton.”

“The big spikes are when you get a big new office building or shopping centre,” Taillieu said.

But the trend overall is steady, slow growth — though multi-residential has been particularly hot. For the last five years, “you could sell anything that came to market,” he said of the multi-family sector.

As for cap rates, Taillieu added if you wanted a “safe number for everything but apartment it’s six” per cent and for multi-residential, it’s five per cent.

Those who have invested in the city are often satisfied with their holdings, he said.

“Lots of people here want to keep what they’ve got and they want to expand.”

This speaks to the challenges for outside capital to find a foothold. Winnipeg’s size is both its bane and boon, Bastable said.

“There are a lot of institutional investors who deploy a lot of capital, and they’re not patient enough to do the deals here,” he added. “You can’t go in and say ‘I want to deploy $300 million in size months.’ ”

Forster agreed opportunity is there for those willing to spend time in the market and are able to wait for it to arise. Forster Projects is behind Seasons of Tuxedo, one of the city’s largest retail and multi-family developments in the last decade.

“(Success) is all about being able to acquire land,” Forster said, adding the retail project worked because of the availability of a large tract in the city’s southwest about a decade ago.

“Now finding that next site is difficult because our projects are typically 700,000 to one million square feet, and Winnipeg is a big, small city,” he said. “The problem with its growth is that it’s steady, but it’s not accelerating.”

He pointed to the fact Winnipeg is very diversified. Growth is happening everywhere. However, it typically involves many smaller projects being developed, or existing properties changing hands and being upgraded.

“Affordability is an issue,” he noted, adding proposed service fees for commercial projects would negatively affect costs even more.

More than anything, pricing is driven by a lack of supply, Martens said.

“Even when something does come to market, it’s very competitive,” said the principal with Marwest, which owns 27 properties in the city. “You could have five to 12 players bidding for a project.”

Cap rates have compressed as a consequence of this supply and demand imbalance.

“That’s not a good thing if you’re trying to buy a product, and if you’re an investor from outside Winnipeg, I think you would hope the cap rates would be trading to a discount to what they are in Toronto,” Bastable said. “But that’s not the case.”

Still, Bizzarri — with Timbercreek, which owns eight Winnipeg properties — said the market is likely to cool slightly in the next 12 months because prices are elevated.

“I don’t think cap rates are going to move very much in the next 12 months,” he said. Like all markets, it is dependent on growth to remain healthy — though not too much growth, he said. That can make the city tricky to invest in for larger players.

All panelists said the hottest segments are industrial and multi-family residential.

“I think office and retail have some major headwinds,” Bizzarri said. The recent boom office space downtown, largely due to True North Square — adding 365,000 square feet of office — has created a tenants’ market.

However, industrial is promising with the growth of ecommerce, Bastable added.

“I like industrial because last-mile shipping is the biggest issue facing e-commerce right now and so that industry will grow significantly.”

Going forward, successful investors in the city will look to projects involved in logistics and warehousing, along with mixed, multi-residential development located next to transportation and amenities. That is a theme universal to most Canadian cities, he said.

More than anything, outside investors need to be patient, and to moderate expectations relative to other markets.

“In Calgary (for example) you can go and make some big home runs, but you can also lose a lot of money,” Bizzarri said, adding Winnipeg is much steadier by comparison. “It’s about singles and doubles here and not necessarily home runs.”