Industrial land supply is – and always will be – the biggest issue facing commercial real estate developers in Vancouver. A study released in December by Port Metro Vancouver found the current supply of trade-enabling industrial land in the Lower Mainland will likely be exhausted roughly within the next 10 years. 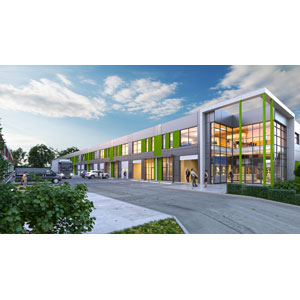 According to Port Metro Vancouver president and CEO Robin Silvester, that shrinking supply is the largest threat facing Vancouver’s livability.

Because industrial land creates jobs, facilitates the movement of goods and is critical to the local and national economies, we need to figure it out or we will all face some serious financial consequences.

Nowhere to go but up?

Hemmed in by mountains and ocean and agricultural land reserves, industrial developers will soon have nowhere to go – but up. At least, that’s been the thinking until now.

However, PC Urban has taken a unique approach and figured out a way to turn existing, older, often obsolete industrial buildings into higher density, high-quality, new mixed use developments within the city of Vancouver, where cost of land has until now made this strategy impossible.

PC Urban has two current projects that are gaining attention – Lightworks, an industrial heritage preservation project that will turn an obsolete industrial building into a new, 54,000-square-foot, six-storey office and retail hub for creative manufacturers and businesses.

“No one makes land anymore,” says PC Urban principal Brent Sawchyn. “So what we’ve done is to find ways to create more density and more employment on existing industrial land.”

The Intraurban project is not only creating opportunities for small and medium businesses to own their own industrial space within city limits, it are creating a space for more jobs. Where once there was a business with 10 jobs, there will now be about 200.

For the Lightworks project in Mount Pleasant, where once there were 15 people working on-site, there will now be about 250.

At Lightworks, the building formerly housed a radio parts manufacturer. New tenants will likely include those who work in design, online, film, gaming and creative manufacturing.

At Intraurban, a factory was making culverts. New tenants will include service industries such as engineering and architectural firms, as well as bakeries, landscaping companies and others.

As Canada grows, as the city grows, there needs to be more businesses and people serving that trade and growth. If there’s only so much industrial land, but you’re adding people and jobs, they have to go somewhere. Projects like PCUrban’s, where older buildings are being re-imagined for higher density and better use, are one solution to start addressing that problem.