PortLiving will take a small bite out of Vancouver’s extremely tight industrial market with a development in the most northeastern corner of the city. 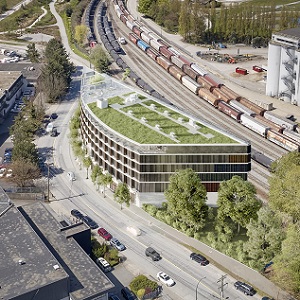 Gateway is being constructed by Vancouver’s PortLiving. (Rendering courtesy PortLiving)

The Vancouver developer recently broke ground on Gateway, a six-storey light strata industrial building which includes three floors of self-storage at 3333 Bridgeway Street. The site sits just north of Hastings Racecourse and next to Highway 1, the Ironworkers Memorial Bridge and the waterfront rail lines.

The building would add about 110,000 square feet of flex industrial space to the regional market, which is facing a vacancy rate of less than two per cent.

Stuart Howard Architects designed the building, which is being marketed by Cushman and Wakefield.

“It’s a Vancouver address and you don’t have to cross a bridge to get to it,” said Gavin McLeod, PortLiving’s development manager.

He said the firm bought the vacant land from a private seller in the fall of 2014. The property had been owned earlier by CP Rail.

“It’s 37,000 square feet of developable site area, so it really gave us the ability to think a bit larger,” McLeod told RENX in an interview.

He said PortLiving likes the proximity to North Vancouver and Burnaby. Also beneficial is that the site did not require rezoning.

McLeod said Levels 1, 2 and 6 will be light industrial spaces for sale. Levels 3, 4 and 5 will be used for a self-storage business PortLiving will retain.

“We could see a technology-related company ending up on the top floor,” he said. “It’s going to function a lot like an office even though it’s not classified as class-A office. The user will still satisfy the I2 (zoning) use, but you can be producing, say, a video game or software.”

The building will feature a distinctive curved facade inspired by “spawning salmon swimming upstream” and a cantilevered roof. It will also boast a rooftop deck and individual decks off the strata units, he said.

“We’re in discussions now with one user to take the whole second level and they would be in the entertainment industry,” McLeod said.

Other uses could include art spaces, trades showrooms, coffee roasting or music studios.

“By going vertical with industrial space, we believe that we are developing fantastic space that can be leased at reasonable market value to help businesses stay and thrive in Vancouver,” said Tobi Reyes, PortLiving’s founder and CEO.

The company hopes to complete the project in early 2020.

Reyes described PortLiving as an “urban infill specialist.” Its focus neighbourhoods in Vancouver include Mount Pleasant, Strathcona and Marpole/South Cambie he said in an email.

“We like to invest in multiple sites within a 500-metre radius so that we can accentuate and leverage on each project’s strengths, create scale to offer services such as mini-storage, and curate the retail offerings,” Reyes said.

“Unfortunately, the current period is somewhat clouded by a variety of headwinds such as a recent drop in higher-end detached housing, a variety of new taxes/quasi-taxes implemented by municipal and provincial governments, the rise of interest rates, conditions arising from tightening mortgage policy, offshore politics and hard cost inflation,” he said.

He said the team will focus on finding ways to reduce building costs, obtain permits more efficiently and maintain delivery schedules to stay competitive in the complex and crowded market.

“Although we believe that there will be relative balance in the market, subtleties in the cost of land and the cost of capital will force developers to carefully decide on project ownership, timing, location and type,” Reyes said.

“This could be positive for the market, as competitors vie to specialize on niches, drive more value to the end user, and generally raise the bar again.”