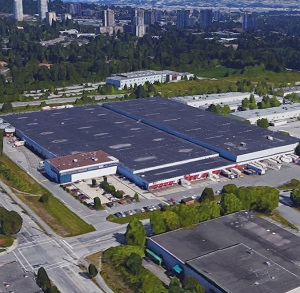 3100 Production Way in Vancouver, which has been leased to Daiya Foods in the region’s largest deal so far in 2018. (Google Maps image)

“Deals over 200,000 square feet are incredibly rare in this market as there are few buildings that size,” said Colliers Vancouver industrial vice-president Stefan Morissette. He represented Daiya, which makes plant-based food products.

With the severe lack of industrial supply, Daiya opted for a substantial facility to accommodate future growth.

Blackwood Partners acquired the property, located in Burnaby, in 2013. The Brick previously used it as a distribution centre before moving into a new facility in North Delta, B.C. with Leon’s late in 2017.

The building has 431,050 square feet of gross leasable area. Automotive parts distributor WorldPac occupies the remaining space, but Morissette said Daiya will take it over once WorldPac vacates.

Approximately 65 per cent of 3100 Production Way’s warehouse space has 20-foot clearance, while the remainder has 32-foot clearance. There are 80 loading bays and a fenced compound at the front of the building. There’s office space in the mezzanine areas and a large staff parking area.

The 18.72-acre property is located close to the Production Way/University Station stop on the SkyTrain’s Millennium and Expo lines, Lougheed Highway and the Trans-Canada Highway.

The property includes 3.93 acres of excess land for future development and expansion. Cushman & Wakefield is marketing that part of the property.

Morissette said industrial rents in Metro Vancouver have appreciated by between 20 and 30 per cent over the past couple of years. There’s not a lot of relief on the way, either, for companies trying to find industrial space.

“There is extremely tight existing supply and most of the new developments on the market are already spoken for or are pre-leasing and pre-leasing prior to completion.”

There have been 19 consecutive quarters of positive absorption in the Metro Vancouver industrial market.