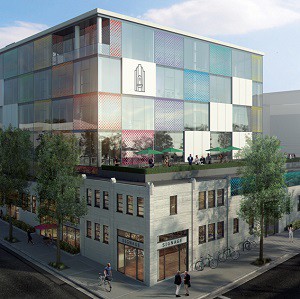 And a new development by PC Urban Properties will soon be a shining beacon for the revitalization of a once heavily industrialized neighbourhood rich in history.

Called The Lightworks Building, only the original Art Deco original façade remains from the old structure constructed in the 1940s. Behind it a brightly lit, 54,000-square-foot glass tower is set to emerge.

Once complete in 2018, the redevelopment will be home to Saje Natural Wellness, a manufacturer, wholesaler and retailer of aromatherapy products. Named by Profit Magazine as one of North America’s fastest growing businesses, the Vancouver firm will make about 47,000 square feet of The Lightworks Building its global headquarters.

(The remainder of the space will be taken up by two other tenants, including a restaurant.)

The company started out in the area in a much more modest building, and now it will soon call what will be one of the most high-profile developments in Mt. Pleasant its home, Sawchyn says.

“The company won’t have any retail outlet there, but it will be doing its designing, testing and marketing of products.”

Moreover the development marks a new era for economic activity in Vancouver and other large cities, like Toronto, New York and San Francisco.

“There’s an element of the return of urban manufacturing,” he says, adding Mt. Pleasant was a manufacturing hub several decades ago. “Only now things are manufactured a lot differently than they once were.”

No longer are manufacturers engaged in manual labour, he adds. “The world is changing and manufacturing is, too.”

Instead the heavy lifting is done with brain power.

It’s a new industrial revolution that is intellectually based and increasingly sprouting up in core urban areas like Mt. Pleasant, he says.

An extension of the live, work and play theme spreading across North America, the development is indicative of the needs of a new generation of entrepreneurs and skilled workers who are shunning the suburbs. Sawchyn says these people want to be in close proximity to work and amenities like groceries, restaurants, cafes and live entertainment.

Central, aging neighbourhoods like Mt. Pleasant are the ideal fit.

Yet the urban manufacturing trend is really building on the neighbourhood’s past in many ways, reigniting its once vibrant economic life, Sawchyn says.

Prior to PC Urban purchasing the building, however, it was in poor condition. Among just a handful of old buildings left in the area, it had been neglected for decades.

The developer had at first intended to renovate and repurpose it to suit a tenant like a craft brewery.

“But it was too far gone — like pulling a thread on the tweed coat where you would address one problem and realize something else needed to be done.”

Fortunately, he says the company had an ally in The City of Vancouver, which asked PC Urban to investigate the building’s history.

“That’s when we found this wonderful story,” Sawchyn says. “It’s not just a heritage building; it’s also an important piece of the history of Vancouver.”

Constructed hastily in 1942 as part of the war effort, the building served as a factory for manufacturing radios and radars, which once complete were hurriedly transported down to nearby False Creek to be installed into ships in the Allied fleet.

“The architect was a young guy from Australia — H.H. Simmonds — and he did a lot of the Art Deco stuff in Vancouver,” he says. “He never married and immigrated here and made quite a mark on the city.”

Dozens of his buildings can still be found around Vancouver.

“Now we advance 75 years, and we’re giving life back to one of his buildings,” Sawchyn says. “It’s almost like a new tree taking root on an old stump.”

He adds while the project has been very challenging, that’s how PC Urban likes it. Established in 2009, the developer has a reputation for taking on complicated projects.

“We have a couple of mantras for our company, and one is ‘We’re always looking for trouble,’ ” says Sawchyn, adding the company has more than $700 million in development mostly in Vancouver, Victoria and the Okanagan.

“We always look for the hard case because it’s stimulating and forces us to be creative.”

That’s where the other motto comes in: “Property re-imagined.”

“You’ve got to think outside the box, but the end result can be magical, and I believe that’s what we’re doing here.”