A downtown Toronto office tower that broke ground at 16 York St. on Wednesday is the first to be built on spec by Cadillac Fairview since the company was purchased by the Ontario Teachers’ Pension Plan in 2000. 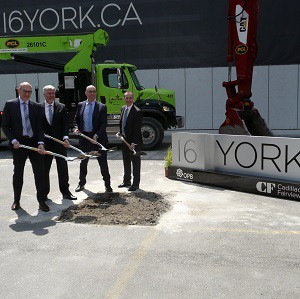 Cadillac Fairview is building the $479-million, 32-storey building in financial partnership with the Ontario Pension Board (OPB) in the booming South Core neighbourhood.

“There are a number of economic factors right now which make this a truly wonderful time to be launching a new building,” said Cadillac Fairview executive vice-president of development Wayne Barwise. “Toronto has a downtown vacancy rate in the four per cent range. In the South Core, where we’re standing today, there’s a vacancy rate of 1.5 per cent. There are about five million square feet of prospective tenants that are looking for space or are coming up for renewals.”

Toronto is the only Canadian city in which Cadillac Fairview would consider launching such a large building before securing a major anchor tenant, according to Barwise.

“All of the other cities have higher vacancy rates and they don’t have the prospective tenant lineup that we see in Toronto,” Barwise said. “That’s being fuelled by the expansion of banks and financial services and the technology industry, which all want to be here, and by a lot of companies that are now moving back into the downtown core because of the recruitment and retention of a young urban workforce.”

“A new state-of-the-art building in this location fits perfectly with our strategy to build a portfolio of the highest-quality real estate assets,” said OPB president and chief executive officer Mark Fuller. “We’re confident that this investment in 16 York will deliver excellent returns for our members.”

The building will be constructed by PCL and managed by Cadillac Fairview. It was designed by architectsAlliance and B+H Architects.

The property at the corner of York Street and Bremner Boulevard offers easy access to Union Station, the core’s public transit hub for the Toronto Transit Commission, GO Transit, VIA Rail, Amtrak and the Union Pearson Express train to Toronto Pearson International Airport. The Gardiner Expressway provides highway access one block south of the site.

16 York will be connected to the PATH indoor pedestrian network and is in close proximity to restaurants, hotels, shopping, the Air Canada Centre, Rogers Centre and the  Metro Toronto Convention Centre.

LEED Platinum and WELL Building Standard certifications will be targeted for the building.

A one-acre green roof at the podium level will be shared by 16 York and Cadillac Fairview and Lanterra Developments’ neighbouring Ice Condominiums at York Centre, while a courtyard with a reflecting pool will provide a place for occupants to relax.

“With 16 York’s proximity to transit, its leading design, amenities and sustainability features, we’re confident that it will appeal to the prime tenants that we’re looking for,” said Fuller.

Cadillac Fairview and OPB are also partners in the TD Centre, RBC Centre and 156 Front Street West in Toronto, as well as 12 office properties and the CF Pacific Centre mall in Vancouver.

“The Ontario Pension Board is a terrific partner that believes in quality of management, quality of service to our tenants and our clients, and that also believes in sustainability,” said Barwise.

“It really has been a shared vision that has been key to the successful and strong partnership that our two organizations have built over the last several years,” said Fuller.

Barwise said Cadillac Fairview coined the name South Core. Its $400-million co-development of Maple Leaf Square with Lanterra and Maple Leaf Sports & Entertainment Ltd., which began in 2007, has since attracted more than $4 billion of investment in new residential, office and mixed-use properties in the area.

“We had a vision 10 years ago for what this area would be,” said Barwise. “I don’t think we ever believed it would all happen as quickly as it has. That’s been a real pleasure to see.”