Developers Kevlar, Constrobourg and Groupe Patrimoine have announced construction of the $750-mil... 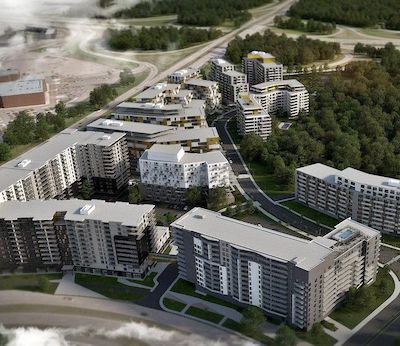 The $750-million Quartier Mosaique in Quebec City will be built by Kevlar, Constrobourg and Groupe Patrimoine. (Courtesy Kevlar)

Developers Kevlar, Constrobourg and Groupe Patrimoine have announced construction of the $750-million Quartier Mosaïque, which they describe as the largest-ever residential project in Quebec City.

The project, to be built over the next six or seven years on a nearly-900,000-square-foot site in the Lebourgneuf area of the city, will have 2,200 housing units in 11 towers divided between condos, rental apartments and seniors housing.

Towers will range between eight and 14 storeys.

“It’s an extraordinary location,” said René Bellerive, president of Kevlar, in an interview with RENX. “As far as I’m concerned, it’s the best site available for a residential development in Quebec City.”

The development will rise at the corner of Lebourgneuf Boulevard and Robert-Bourassa Highway, near the Galeries de la Capitale mall, about a 15-minute drive to downtown and 20 minutes to the Old City.

Land for the development was sold by the city. Kevlar submitted a bid for the land, but construction firm Constrobourg won the bidding process. However, Constrobourg and Kevlar have worked on a number of projects together in Montreal and Quebec City and spoke about partnering on Quartier Mosaïque.

The other partner for the development, Groupe Patrimoine, has already begun construction of a seniors housing project on the site, to be called Le Marc-Aurèle.

“Lebourgneuf is a really nice area which has had a lot of residential and commercial growth over the years. That’s why we got involved in the project and believe in it a lot,” said Bellerive, who described Quartier Mosaïque as a multigenerational project.

Quebec City’s condo and rental markets are very strong and immigration is solid, he said.

Rental apartments at Quartier Mosaïque will also attract, among others, young professionals who don’t have enough money to buy a condo. Students, whose parents can buy or rent a unit, will be another strong market.

Bellerive said Quebec City has an aging stock of rental apartments and many people are looking for more modern and smaller apartments.

A sales and rental office is being built on the site and should open in January.

Overall, plans call for Quartier Mosaïque to have 555 seniors units, 485 condo units and 1,150 rental apartments. Kevlar will focus on the condo units and Constrobourg will be involved with apartment units.

Financing for the development will come from banks and a real estate fund created by 12 Quebec City and Montreal businesspeople. Among those investors are Bellerive and Constrobourg president Réal Bourdeau and principals of construction firm Pomerleau, which will be involved in the building of Quartier Mosaïque.

Services at the development will include outdoor heated pools, of which some will be on rooftops. The condos will also have lounges, exercise rooms, billiards and ping pong tables.

Each building will have underground parking and the developers are looking into providing a shared bicycle rental service to residents.

The development will also have a commercial component, with ground-floor neighbourhood retailers like cafés, butchers and produce sellers.

Given the density of the project, Quartier Mosaïque will have plenty of green spaces and there is a wooded area next to the site, Bellerive says.

Although Kevlar is based in Montreal, “I spend a lot of time in Quebec City,” Bellerive says. “I’m there every week and have a team there.”

Kevlar is “very involved in Quebec City,” primarily in the Saint-Roch neighbourhood, and has built condos, seniors homes and offices in the city.

Among its developments, Kevlar has built several condo projects using the Sax moniker, including on Nuns’ Island in Montreal and in Lebourgneuf in Quebec City.

“It’s a bilingual name and is easy to pronounce,” he says of Sax (short for saxophone). “We wanted to add a bit of creativity. Instead of buying an A, B or C unit, you buy a Diana Krall, a (Ella) Fitzgerald or Oscar Peterson.”

Kevlar is currently building the 41-unit Sax sur le fleuve (Sax on the river) in the Old Port of Montreal. Most of the units, priced from $1.2 million, have been sold.

The developer is also finalizing plans for Noria, a 380-unit rental apartment development on Marcel-Laurin Boulevard and Crevier Street in the Montreal borough of Saint-Laurent.  A rental office for Noria will open next March.