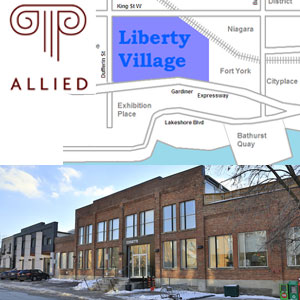 “We’ve always had a position in Liberty Village and thought this was a very good opportunity to add to that position in a way that would give us good yield going in and a good intensification opportunity going forward,” Emory said.

Allied didn’t look favourably on the acquisition environment entering 2016 due to high costs, low capitalization rates and a lack of available product. That view seems to have changed somewhat, however, as Emory said he’s examining some deals.

“The cost remains very high and getting properties at cap rates that are at respectable levels of return remains difficult. Availability, on the other hand, has increased quite significantly in the last four to eight weeks. This latest transaction in Liberty Village is an example of that. It came up relatively quickly and we moved on it relatively quickly.

“We’re seeing other opportunities in Montreal and Toronto, so it’s possible that the availability proves to be more favourable than we anticipated, but it’s too early in the year to really know for sure.”

Allied’s $31-million Liberty Village acquisition of 30, 64 and 70 Jefferson Ave. includes a 2.6-acre property comprised of 78,820 square feet of gross leasable area and 120 surface parking spaces. It’s directly across the street from Allied’s The Castle and 32 Atlantic and 47 Jefferson (shown in the image).

“In time, the very underutilized land at the site will be intensifiable with additional office, retail and perhaps even residential use,” said Emory. “I fully expect that in the interim Liberty Village will simply get stronger and stronger with each passing year.”

The property was purchased from ZoomerMedia, which acquired it several years ago, made a nice profit from the sale and has signed a 10-year lease with Allied to occupy the entire space.

“It’s a good move, in my opinion,” said Emory. “It generally doesn’t make sense for people to have inordinate amounts of capital tied up in real estate when they could deploy it in their core business, presumably much more profitably.”

Another recent acquisition includes a joint venture with First Capital Realty (FCR-T) where each spent $10.5 million on a property in Calgary’s Beltline area at 816 to 838  11th Ave. SW. It offers about 70,000 square feet of Class-I brick and beam space with a large parking lot, long-term intensification potential and a good interim yield.

Allied has long-term belief in Calgary and even though its economic problems since last year’s collapse in oil and gas prices make it an underperformer in its portfolio, Emory is still satisfied with overall leasing velocity.

“In every market with the exception of Calgary, the level of occupancy is extraordinarily high and we’re basically out of space. Even in Calgary we’ve been able to maintain a respectable level of occupancy of about 90 per cent across the portfolio. That’s in part because our segment is somewhat defensive in a downturn. We’re the low-cost provider in the inner city and that insulates us somewhat.

“We also aren’t terribly exposed to the energy sector, which tends to concentrate in more conventional towers. We tend to serve tech, media, advertising and information-type tenants. They tend to have, at the moment, smaller requirements.”

The owner, manager and developer of urban office environments also entered into expansion negotiations with existing tenants at 250 Front Street West in Toronto that could result in additional lease-up of 93,000 square feet of space.

Allied has a market cap of $2.6 billion and earned net income of $254.37 million last year. It completed four developments in 2015 and anticipates starting two or three new projects this year, predicated on pre-leasing.

“It’s now fully approved and we believe we have an anchor tenant for that project that will enable us to kick it off comfortably,” he said.