Adi Development Group chief executive officer Tariq Adi said he had a simple reason for expanding into the Toronto market: “We got tired of being called the Burlington guys, so we decided to make the move into the city and picked up two high-profile sites.” 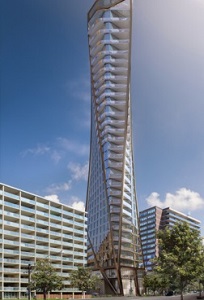 From its roots in Burlington, a city located along Lake Ontario between Toronto and Hamilton, the company has grown steadily.

“Adi is slowly becoming a major player. We’ve got close to 5,000 units in the pipeline and counting. There are some pretty big projects coming along. We’re sitting at $2 billion under development.”

The Toronto sites Adi is working to develop are at 64 Prince Arthur Ave. and 135 Portland St.

The more high-profile of the two is 64 Prince Arthur, located between the Annex and Yorkville neighbourhoods. The proposed condominium features a bold design by New York City-based CetraRuddy Architecture.

“People are calling it a condo like nothing seen in the city before,” said Adi. “It’s very unique in that it’s a 29-storey building but stands at the height of a 49-storey building, and it only has 60 suites.”

Adi concedes there’s been pushback on the building’s height from some members of the community, but said the company will hold a public meeting to hear concerns and is working with the City of Toronto. It has also appealed to the Ontario Municipal Board (OMB). Adi is hopeful he’ll get site plan approvals in the next eight to 12 months.

Adi is also looking to get site plan approvals in the same time frame for another Toronto condo at 135 Portland St. in the King West neighbourhood, which he said has the support of the City and the local community. The 16-storey building will have 117 residential units, 5,000 square feet of retail/commercial space at grade and underground parking.

The development will replace some semi-detached and row house-style buildings, but retain two houses that will be incorporated into the Quadrangle Architects-designed project.

“We’re going to have some really cool, larger family-sized units on the upper floors of 1,200 to 2,000 square feet,” said Adi. “There’s not a lot of big product in that pocket.

“I’m starting to see that a lot of families are opting out of moving to the suburbs. The whole ‘drive-until-you-can-afford’ approach is gone. People are more focused on lifestyle, proximity to work and not giving up on the perks like the restaurants and 24-hour nature of the city.

“I think we’re going to start to see a resurfacing of larger condominiums as homes. It’s slowly going to become the only option for some folks.”

Adi said there are a couple of other Toronto sites his company is looking at developing, but he can’t talk about them until everything is finalized.

In the meantime, the company still has its hands full with a variety of developments on its home turf down the Queen Elizabeth Expressway in Burlington. The company is especially interested in sites around mobility hubs, and Adi believes the western Greater Toronto Area can still offer value to buyers who’ve been priced out of Toronto.

StationWest, a site on 13 acres of reclaimed brownfield land adjacent to the Aldershot GO Transit station in west Burlington, will eventually become a community of 2,500 units in townhomes, stacked townhomes, mid-rise and high-rise condos. Construction has started on the sold-out first phase while the second, with four buildings taller than 30 storeys, is still to come.

“We’re really trying to push density and attract a growth surge for the area,” said Adi. “It’s truly underserviced from that perspective.”

The company just received a favourable decision from the OMB regarding its Nautique Lakefront Residences project in downtown Burlington. Adi said the condo is 85 per cent sold. Construction on the 170-unit building should start soon.

Evoke and Valera are two condos across the street from each other in north Burlington. The former will have 601 units in a 17-storey building while the latter will have two 10-storey buildings surrounded by low-rise housing that will encompass 414 units on a five-acre site. Plans are being finalized with the City of Burlington.

“We’re really going to start to change that uptown corridor,” said Adi. “The City really wants to see that changed.”

There’s more in the local pipeline as well, according to Adi, who said: “We’re working through a couple of other sites in north Burlington around a transit corridor and Highway 407.”