AHIP another hotel REIT on a roll 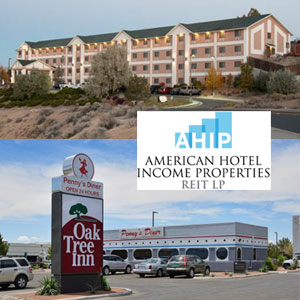 “The first quarter is usually the weakest of the year, but this was a very strong quarter that set records in both profits in real dollars and profit per share,” said chief executive officer Rob O’Neil. “It was good that we had that chance to show the analysts that we can beat their expectations, which we did quite handily.”

AHIP (HOT.UN-T) had its initial public offering in February 2013 and has made significant strides since then, as its market cap has grown from $75 million to $357.8 million on the Toronto Stock Exchange and its assets are closing in on $800 million.

That premium-priced bid could mean good news for AHIP.

“The average hotel in our portfolio is probably 12 years old, and I would argue that Hilton, Marriott and InterContinental (Hotels Group) are better delivering brands of quality. We think we’ve got an exceptional portfolio and somebody’s going to recognize that.”

AHIP’s portfolio is comprised of 80 hotels with 7,072 guestrooms in 27 American states. Properties are primarily located in secondary and tertiary markets in close proximity to railroads, airports, highway interchanges and other demand generators.

External hotel manager ONE Hospitality Group (a subsidiary of O’Neill Hotels & Resorts Ltd.) delivered meaningful growth in operating income and margins in both rail and branded hotels through effective yield management and strong cost discipline, according to O’Neil.

Rail hotel revenues were stabilized by long-term contractual guarantees whereby railway companies pay for from 60 to 100 per cent of the rooms in their contracted hotels for their freight line crews, whether they’re occupied or not.

Two more expansions of Oak Tree Inn hotels in Oregon and Nebraska are scheduled to be completed during the second and third quarters of this year.

While AHIP isn’t sure if all of the deals will go through, it’s looking at acquiring seven more hotels before the end of the year and converting them to Oak Tree Inns.

“Capital expenditures are paying off,” said O’Neil, who also cited more people travelling and a lack of competitive construction in those markets as factors driving those improvements.

“Virginia has been performing very well. The Hampton Inn Harrisonburg – University at the gates of George Mason University just finished a major renovation and is our largest Hampton Inn in the group. It beat its prior year by almost 25 per cent.”

AHIP had a conservative outlook for its Oklahoma hotels last fall because of the state’s large exposure to the devalued oil market, but showed significant performance improvement against its competitors and had an occupancy rate of about 80 per cent in its Oklahoma City properties.

AHIP is now paying an American dollar-denominated distribution that aligns its payout with its cash flows, eliminating currency risk and related costs. AHIP units also trade on the OTCQX International marketplace in the United States.