AIMCo (Alberta Investment Management Corporation) will be moving into HSBC Place in Edmonton when the international investment giant finishes an extensive renovation of the downtown tower. 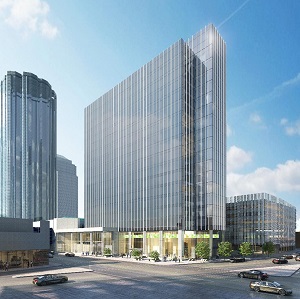 AIMCo bought the HSBC building in 2017. It will consolidate its Edmonton workforce on eight floors of the 17-floor building, located on 101st Street in the financial core of the city, when the refurbishment is complete at the end of December 2019.

The move will empty the top four floors of the Intact Insurance Building at Jasper Avenue and 108th Street in the government district.

HSBC Place is currently vacant as a total refit of the 38-year-old building is underway. Pat Dineen, executive vice-president for Epic Investment Services, the asset management company for HSBC Place, said after the AIMCo move and the return of some previous tenants there will be about 100,000 square feet remaining to lease in the 317,000-square-foot tower.

Dineen said it’s not unusual for institutional organizations to take space in their own buildings.

“Organizations like that have many companies or holding vehicles, so everything’s done in a standard arm’s-length lease,” Dineen said.

AIMCo’s release on the planned move says it will contribute to the success of the HSBC Place renovation and begin to “generate revenue for AIMCo’s clients.”

The HSBC building refit includes a reskinning of the building and new wiring, heating and HVAC. It will feature floor-to-ceiling glass and nine-foot ceilings. The building will be LEED Gold when complete, Dineen said.

“We’re going to end up with almost a brand new building. The quality will be as good or better than anything in Edmonton, maybe anything in Canada, actually.”

There will also be amenities including a tenant fitness centre, conference centre and bicycle storage. The property includes a seven-storey parkade.

“The move ensures the organization has the flexibility to accommodate its growing workforce in a building that is modern and attractive to new talent,” AIMCo’s CEO Kevin Uebelein said in the company release.

Dineen described the location of HSBC as the pivot point between the financial district and Edmonton’s ICE district.

“It’s about adding value to an asset that AIMCo owns. It makes good sense for them to move into a building that they are redeveloping and have an ownership position,” he says. “You solve the vacancy problem and add value to a property you own.”

Avison Young is the firm which will have to find a tenant for those empty floors in the Intact building. The city’s government district has had challenges in recent years with high office vacancy rates, but Wosnack said the move shouldn’t be a “bruise” on the government district.

Mark Hartum, the principal with Avison Young in charge of leasing the Intact building, said the space being vacated is some of the nicest office space in the city.

“We are going to have just over 100,000 square feet available for tenants starting in 2020,” said Hartum. “The nice thing is 85,000 square feet of it is the top four floors in the building. It’s contiguous space with interconnecting stairwells.

“It’s one of the largest continuous blocks of space available in the market, so for the first wave of marketing the prospects we’ll be targeting would be larger users that could take multiple floors.”

“I think it will lease. Obviously we would like to see a bit more momentum and activity in the market, but this is some of the nicest vacancy in the city.”

The Intact building is owned by Procura Real Estate Services. It was fully renovated, including an exterior rescinding, in 2009. Procura has other property on Jasper Avenue and is investing in building up the district, says Hartum.