The selloff of properties owned by the Algoma Central Corporation (ALC-T) continued this week with the sale of its Corporate Park holdings in St. Catharines, Ont. 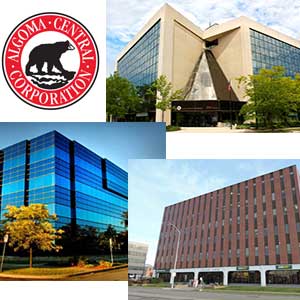 Algoma says net proceeds from its share of the properties is $26.4 million. It did not disclose the buyer.

The site includes two office buildings which had been owned by Algoma, a third building in which it held a 50 per cent interest, as well as 2.1 acres of vacant land which is available for development.

In total, the properties contain 141,000 square feet of leasable space.

It’s the latest move in Algoma’s strategy to divest its real estate holdings, which it announced in 2016. Money raised from the sales will be directed to the renewal of the company’s core business, its fleet of dry and liquid bulk carriers which operate on the Great Lakes and St. Lawrence Seaway.

Algoma’s former properties division at one time held a portfolio of 13 properties in Sault Ste. Marie, St. Catharines and Waterloo, Ont. Together, they comprised more than a million square feet of floor space.

“But if you were just a real estate company you wouldn’t sell now. You’d hold on to it and keep growing . . . but if you want to reinvest in higher returns in the shipping business, the timing is right.

Algoma had created its properties division in 1973 as it moved to diversify operations. It has already sold several other major properties, including the University of Waterloo’s campustech ($36.8 million) and its Martindale Business Centre in St. Catharines.

In October, Algoma announced it had sold the 47,585-square-foot Ridley Square shopping centre in St. Catharines for $14.1-million.

When it began divesting the properties, Algoma said the portfolio had a 94% occupancy rate and strong financial performance.

In addition to its central shipping business, Algoma also provides “ship management services” for other companies and is seeking out opportunities to expand into other global niche markets.