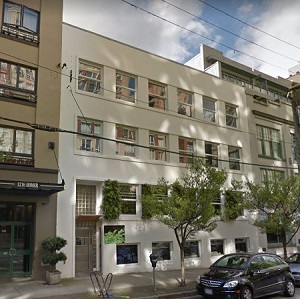 1220 Homer St. in Vancouver, home to Perkins + Will Architects, has been acquired by Allied Properties REIT. (Google Street View image)

“These are strategic acquisitions for Allied, in that we’re increasing our penetration in urban Vancouver just as it’s transitioning to a primary Canadian office market,” Michael Emory, Allied’s president and CEO, said in a statement announcing the purchases.

Allied said it has bought 1220 Homer St. and entered into an agreement to acquire 151 West Hastings St.

“1220 Homer augments our concentration of class-I properties in Yaletown,” Emory said in the statement. “151 West Hastings will be our first acquisition in Gastown, the Vancouver neighbourhood most like King and Spadina in Toronto, both in its proximity to the downtown core and its concentrated heritage scale and texture.”

Located on the east side of Homer, just off Davie Street, 1220 Homer is a tier-one class-I building with 21,708 square feet, fully leased to Perkins + Will architects through March 2023. The workspace was designed by Perkins + Will and is certified LEED Existing Buildings: Operations and Maintenance 2009 Platinum Certification.

It is Allied’s fourth property along a four-block stretch of Homer Street, and its fifth in Yaletown.

Located on the north side of West Hastings, one building in from Cambie Street, 151 West Hastings is also a tier-one class-I building. The façade has been impeccably preserved, Allied says, and the interior rebuilt to current workspace standards. It is comprised of 38,511 square feet of GLA and is leased to Spaces through July 2033, with four rent escalations in the contract.

The two acquisitions are just a few blocks north and south of Allied’s ongoing 400W. Georgia project (a partnership with Westbank, which is currently building the tower). The mixed-use office and retail tower will contain about 367,000 square feet of space when completed in 2020.

Deloitte was recently announced as the anchor tenant for the project, taking 10 upper floors and 117,000 square feet.

Allied is providing a share of the financing at 400W. Georgia, and is committed to purchasing a 50 per cent interest in the building when it is complete.

Allied is a leading owner, manager and developer of urban workspace in Canada’s major cities, and urban data centres in Toronto which form Canada’s hub for global connectivity.