Allied Properties REIT (AP.UN-T) has announced it will acquire the office component of Jesta Grou... 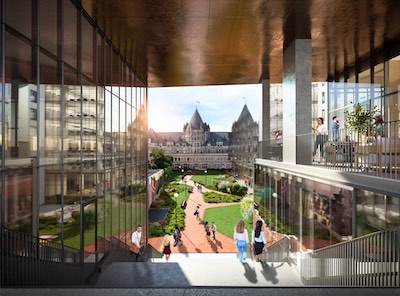 Allied Properties REIT (AP.UN-T) has announced it will acquire the office component of Jesta Group’s million-square-foot Place Gare Viger redevelopment in Montreal. The acquisition includes the iconic 123-year-old Gare Viger, known as The Chateau, a forward purchase of the new office tower which will be anchored by pharmaceutical giant Novartis, as well as adjacent developable land.

The transaction is also the second major Montreal office sale announcement in the past week, with Groupe Petra and MACH buying the 51-storey, 1000 de la Gauchetière from Ivanhoé Cambridge.

“We’re sincerely grateful to Jesta and CBRE for making this collaboration possible,” said Michael Emory, Allied’s president and CEO, in the announcement. “It will enhance Allied’s ability to provide distinctive urban workspace to knowledge-based organizations in Montréal and other Canadian cities, which is our mission in life. I also believe it will contribute to making Place Gare Viger one of the finest mixed-use urban neighbourhoods in our country.”

Jesta Group will retain the urban residential and hotel components of the complex.

Place Gare Viger and the redevelopment

Since beginning the redevelopment effort in 2012, Jesta Group has transformed Gare Viger, a significant Canadian heritage property constructed in 1898 by Canadian Pacific Railroad as the city’s rail station. The property now hosts an urban office, residential and hotel complex.

The structure is comprised of 122,643 square feet of office and retail space adjacent to 21 surface parking spaces. The Chateau is 95.7 per cent leased and will continue to operate as a premiere class-A property under Allied’s management, along with 425 Viger, Nordelec, 5505 St-Laurent, 5445-5455 de Gaspé and others in Montréal.

Growing Montreal-based commerce firm Lightspeed is one of the major tenants in The Chateau, recently doubling its commitment to six floors of the building. It will serve as Lightspeed’s global headquarters.

Jesta Group recently announced the hotel portion will be occupied by a 177-room Hyatt Centric, the first Hyatt Centric property in Canada.

The development land, financing the acquisitions

The  development land is at 810 Rue Saint-Antoine East, across Rue Saint-Hubert and immediately to the east of Gare Viger. The property includes 75,672 square feet of land with a small office structure (43,500 square feet) and surface parking for up to 132 vehicles. In the near-term, Allied will use the office structure as swing-space and continue to operate the parking facility.

Its longer-term plan is to develop a new building suitable for use by biotech and life-science users.

The acquisition of Gare Viger and adjacent developable land is expected to close in late August 2021, subject to customary conditions.

Allied will assume an existing $51.75-million first mortgage on Gare Viger, with a three-year-term remaining at 2.8 per cent annual interest. It expects to fund the remaining $76.45 million initially with Allied’s operating line of credit, then via proceeds from the sale of non-core properties in Montréal and Toronto.

Jesta Group’s new seven-storey office building at 700 Rue Saint-Hubert, just behind Gare Viger, is scheduled for completion in late 2022. It will be feature 145,743 square feet of GLA and 145 underground parking spaces and is approximately 24 per cent pre-leased to Novartis Pharmaceuticals.

The purchase is expected to close in the second half of 2022, subject to closing conditions.

The REIT owns and operates over 200 properties across Canada, comprising more than 14 million square feet of GLA.

The Jesta Group is a family-owned Montréal-based business that has been an active investor and developer of real estate for over four decades.

Its portfolio of hotel, residential, retail and industrial properties can be found in Montréal, Miami, New York, London and Paris, as well as in several Mediterranean destinations.