WiredScore has signed its biggest deal yet in Canada, a contract to audit 122 buildings in Allied... 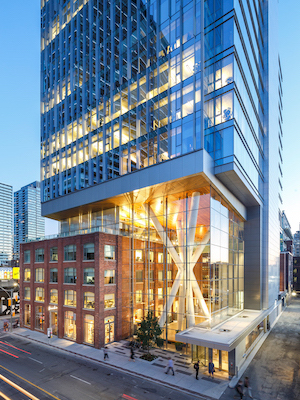 The QRC West building in Toronto is one of 122 Allied Properties buildings which will receive WiredScore certification. (Courtesy Allied / Doublespace Architectural Photography)

WiredScore has signed its biggest deal yet in Canada, a contract to audit 122 buildings in Allied Properties REIT’s (AP-UN-T) portfolio for Wired Certification.

Wired Certification is WiredScore’s internationally recognized rating system for commercial real estate. It helps owners and property managers design and promote the digital connectivity and technological capacity of their buildings to tenants.

“We want a way to measure, and to learn from the measurement, the technical capabilities of our buildings,” Allied president and chief executive officer Michael Emory told RENX. “We really want to understand how our buildings compare to others, both within our portfolio and with others with whom we compete, to make sure that the knowledge-based organizations we serve have the level of connectivity in our buildings that they need.”

The Toronto-based owner, manager and developer of urban workspace and data centres has properties in Vancouver, Calgary, Edmonton, Kitchener, Toronto, Ottawa and Montreal.

They range from adaptively reused structures built more than a century ago, to LEED Gold- or Platinum-certified properties built within the past five years.

Many Allied tenants are technology, advertising, media and information-based companies which require high levels of connectivity.

“Their brand speaks for itself,” said Andrew Freitas, who recently became WiredScore’s head of Canadian operations. “We’re looking forward to helping (Allied) build that brand from the perspective of being one of the most technologically forward-thinking landlords in Canada.”

Allied acquired a 278,483-square-foot building at 151 Front St. W. in 2009 which Emory said has become “Canada’s only full-fledged Internet hub and a critical component of Canada’s telecommunications infrastructure.”

Some of Allied’s smaller and older buildings, which have little space for technological equipment, have fibre-optic connections to that data centre to enhance their digital performance and capacity.

“151 Front has more fibre-optic entry points than any other building in the city,” said Emory. “There’s more inter-connection there than anywhere else in the country.

“Floor-loading is outstanding. The power coming to the building is extensive. We have deep-water cooling, which is much more efficient in terms of keeping the equipment cool. And, we have every conceivable form of redundancy that you would need.

“Even if the grid collapses, that building can be run on back-up diesel generating power indefinitely. It’s No. 1 in the queue for fuel oil.”

Allied’s 122 buildings seeking Wired Certification represent almost 11 million square feet of space and about 70 per cent of the REIT’s portfolio.

“When we’re tested to a rigorous, independent and objective set of standards, then we’ll really know with more validity how well our buildings are performing in that regard.”

The Wired Certification process typically takes 60 to 90 days per building, from sign-up to going public with a score. However, that can vary based on whether a development or an existing building is being certified, as well as other factors.

“Every building is unique and sometimes the time can be much shorter if they’re happy with the status and initial score that comes through from an audit, versus if there are a few items from a recommendation standpoint that we’re going to help them work through, where it will be a little longer,” said Freitas.

These differences, as well as the size of a project, also affect the price of a Wired Certification. This ranges from $10,000 to $46,500 per building in Canada, according to Freitas.

Wired Certification has become part of the due diligence process when Allied evaluates buildings for possible acquisition. It will also be a major factor when designing new buildings, according to Emory.

A 2018 survey by market research company Radius Global and WiredScore found fast, reliable Internet ranks second only to location as the most in-demand amenity in office buildings.

Sixty-seven per cent of leasing decision-makers in the survey said they would limit their office searches to Wired Certified buildings only, knowing they meet exacting standards for Internet connectivity in terms of speed, reliability and resiliency.

“We are very fortunate to be working with many of the best names in our industry,” said Freitas. “Our goal is to continue working with them and helping support them.”

More than 2,000 buildings and more than 500 million square feet of office space are now committed to Wired Certification, and five million people work in Wired Certified buildings across North America and Europe.

WiredScore entered Australia in October, with the certification of 14 Lendlease developments in Sydney, Melbourne and Brisbane. It also received additional funding in the United Kingdom and Germany.