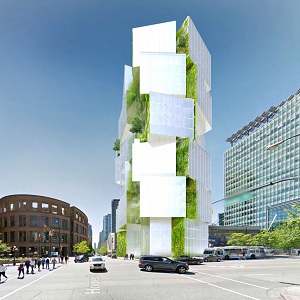 Allied Properties REIT has become a partner with Westbank on this proposed development at 400 West Georgia St. in Vancouver. (Rendering courtesy Westbank)

“It’s a way for Allied to penetrate the Vancouver office market in a fairly material way,” Allied president/CEO Michael Emory told RENX in an interview. “On completion, this would represent about a 60 per cent increase in our Vancouver office portfolio.

“We like the Vancouver office market very much,” Emory added. “We think (Vancouver) is undersupplied. . . .

“We have managed to assemble about 300,000 square feet of office space in Yaletown and Crosstown, but that’s a relatively small portfolio for us, and it is one of our important objectives to grow the Vancouver office portfolio.”

The 21,000-square-foot site at 400 West Georgia Street is currently home to a Budget Car rental outlet. In April, high-profile Vancouver developer Westbank Projects submitted a rezoning proposal to construct a 24-storey, 345,000-square-foot office tower to be completed in 2020.

The steel, glass and concrete building was designed by Merrick Architecture. Inspired by a Japanese lamp, the renderings included in the rezoning application show a bold building comprised of stacked offset cubes, gripping a single core.

Emory said the deal represents the latest partnership between Westbank and Allied, and follows joint deals between the partners on the Telus Sky office and residential building now being built in Calgary. The developer and the REIT also teamed up on a tower at 19 Duncan Street in Toronto and a third project at King and Spadina in Toronto.

“Allied and Westbank work well together,” Emory said. “We see the world in a similar way and bring complimentary expertise to the different projects.”

Allied’s acquisition of an undivided 50 per cent interest in the property is expected to close in early 2020. Westbank will manage the property.

“It basically marries Allied’s access to capital with Westbank’s extraordinary development expertise in the City of Vancouver,” Emory said.

The project, if approved, would arrive in Vancouver as part of a second wave of recent office development in the downtown core, following the addition of about 2.3 million square feet of new class-AAA office space between 2012 and 2016.

By 2019, Vancouver is projected to have the second-tightest office market in the Americas and the 10th-tightest globally, with an office vacancy rate of 6.3 per cent, according to a report released on July 21 by Cushman and Wakefield.

Westbank is a heavy hitter on the West Coast. The developer is also behind marquee projects such as Telus Garden, Shaw Tower and Vancouver House. Westbank declined a request to be interviewed for this story.

In Westbank’s rezoning application for the site, Westbank president Ian Gillespie wrote a letter dated April 28, 2017 saying the project originated with the city’s plans to remove the traffic viaducts on its eastern downtown shoulder.

“There is a clear opportunity to create a new gateway into downtown, at Georgia Street,” Gillespie wrote.

“With more projects like the new Vancouver Art Gallery, the development of the historic Canada Post office, the adjacent Moshe Safdie-designed Vancouver Public Library Central Branch and with many new developments further west, it becomes clear how our original vision of Georgia as the city’s ceremonial avenue is coming together.”

Gillespie said 400 West Georgia aims to set the standard for future office development in Vancouver, positioning the city to attract high-tech employers by building this tower on spec.