Changes in Canada’s office market will accelerate in 2016 and beyond, according to longtime real estate observer Sandy McNair. 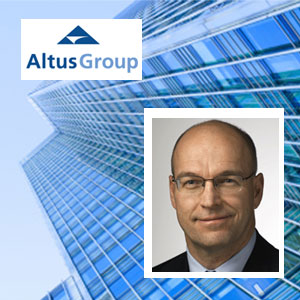 “We see the fragmentation accelerating, based on the users becoming more and more distinct and different,” said McNair, former president of Altus InSite who currently holds the title of Altus Data Solutions’ data curator at Altus Group.

More demanding than ever before, tenants are looking for newer, more functional space and will be looking to pack more employees into spaces than in the past.

The Toronto-based McNair does not see an end to a building boom in major urban centres that has been spurred by cheap money, which will put more pressure on operators of older, less functional office stock.

“We see new supply continuing, in most markets, and the reasons for that are several,” said McNair.

Real estate investment vs everything else

“We see the pressure to place capital in real estate will continue, with real estate continuing to be viewed very favourably compared to stocks, bonds and other choices. We see with that pressure to place capital a bias towards new buildings versus bidding on existing buildings and we also see the occupiers more intensely using less but better space, triggering new.”

Those new buildings are for the most part not your grandfather’s office tower, he added.

“The new buildings today are really new. There is a bunch of new technologies in them, different levels of environmental stewardship, and often they are just a little bit off the traditional ‘centre ice’ and that often allows them to have lower realty taxes.”

Each major market is unique, he added. “Every one of the markets has got a great story to tell because they have all gone through a fairly significant spike in new supply and the demand characteristics have also shifted.”

The fight for talent

Increasingly, buildings are going to be judged as much for their “vibe” as they will be for efficiency and location, added McNair.

“The battle for talent by many occupiers causes them to want a little bit of an edge to the space. So whether you call it vibe or vibrancy, we see that becoming more and more of a concern and an opportunity.”

That, too, will put pressure on owners to come up with features and accents to cater to younger, urban knowledge workers.

Because the downtown core of cities such as Toronto are already full, that has pushed new developments far enough away that they can lay claim to having some of that “vibe,” argued McNair.

“The markets, whether it is Toronto or Calgary or Vancouver, aren’t homogenous anymore, they are all fragmented,” said the Altus executive.

“Taking Toronto as an example, King West is very active, very tight and even though there has been new supply, the demand has significantly outstripped it . . . whereas other parts of Toronto might have a different story.”

That is making the job for researchers, tenants and building owners more difficult and the space and its demand have fragmented.

“We are now well past that point where the averages are helpful, in many cases the averages are dangerous and you now have to do the detailed work to dig into the specifics of this intersection versus that intersection and this occupier versus a more traditional or different kind of occupier,” he said.

That argues against a shift in the market to online leasing. “I still think there is a negotiation that goes on there and there are some vested interests in keeping the legal profession involved.”

McNair has a number of scenarios for the Calgary office market, none of them good.

“We see lots of stress in Calgary and we eventually see, like we have already seen in Edmonton and Ottawa, some office buildings getting repurposed to other uses.”

The advisory firm forecasts the country’s oil capital office market being “lower for longer” because of the depressed energy markets “and that is going to put continuing downward pressure on employment.”

It could also end shrinking personal office space. “At some point we are going to see density change. Calgary has been the most generous market with space per employee and we see that tightening up.”