Amazon has reiterated its commitment to expansions of its office space and workforce in both Vanc... 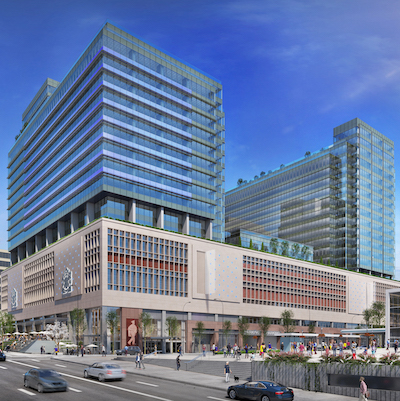 Amazon will lease all the office space in both towers at The Post in Vancouver. (Courtesy Amazon, Quadreal)

Amazon has reiterated its commitment to expansions of its office space and workforce in both Vancouver and Toronto, and says it plans to hire an additional 3,500 corporate and tech workers in those two cities during the next couple of years.

Amazon already has major tech hubs in both cities.

In Vancouver, Amazon says it will be hiring an additional 3,000 people to work at its much-expanded new 680,000 square feet of office space at The Post.

The company had already planned to lease a major chunk of space at The Post, which is currently undergoing a complete redevelopment. In the release, Amazon confirms it will lease 18 floors in the building’s North Tower and 17 floors in its South Tower, as the sole corporate tenant.

Property developer and manager QuadReal is overseeing construction to achieve LEED Gold certification while preserving the building’s existing historic façade. Development is on track for completion by 2023.

“The City of Vancouver is so excited to see Amazon creating an additional 3,000 well-paying jobs for people who want to work and live in our city. The fact that Amazon is doubling-down on our local economy highlights the strength of our tech sector and shows that Vancouver is where companies want to establish themselves and grow,” Vancouver Mayor Kennedy Stewart said in the announcement Monday morning.

In Toronto, Amazon will lease 130,000 square feet of additional space at a new office tower on York Street, adding five floors to accommodate the creation of 500 new jobs.

“Today’s announcement by Amazon is good news for Toronto and a sign of continued confidence in our city and our tech sector,” Toronto Mayor John Tory said in the release.

The commitment to additional office and commercial space puts Amazon at odds with some other tech giants, which are moving more to remote work models and at least considering reducing their commercial leasing footprint. The move in Canada has been led by Shopify, which plans to sublet 170,000 square feet at its current Ottawa office as it moves into a new, nearby building.

“Amazon’s investment has tangible benefits for the broader economy and community – from the people we employ, to the small businesses we empower, to the charities we support, to the academic opportunities we fund. We’re proud to reaffirm our commitment to Canadian cities at this critical time,” said Jesse Dougherty, Amazon VP and Vancouver site lead, in the announcement.

The fast-growing company says it has more than 800 tech and corporate roles currently open across the country. Seattle-based Amazon now has more than 21,000 full- and part-time employees across Canada, up from about 10,000 in 2018.

The company says it has invested more than $11 billion across Canada since 2010.

While Amazon is best known for its online shopping business, the company has and continues to expand into many other related businesses.