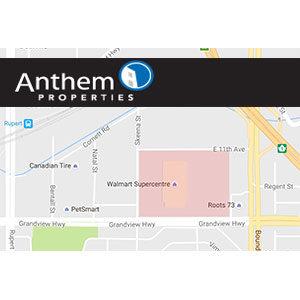 Anthem executive vice-president of investment Bill Kennedy said the seller wishes to remain anonymous and that he couldn’t reveal the purchase price or terms of the partnership.

Grandview Properties Park is on the Vancouver-Burnaby border and encompasses the block between Boundary Road to the east, Grandview Highway to the south, Skeena Street to the west and East 11th Avenue to the north. It’s easily accessible to SkyTrain and two major transportation routes, including the Trans-Canada Highway.

“It’s unusual to find such a large piece of property in Vancouver, so we were attracted to the 15.3 acres of land in such a great location,” said Kennedy, noting that the acquisition is Anthem’s largest in Vancouver in three years and one of the largest private land deals in the city in the last two years.

“The tenants are also stable and long-term. We think it’s an excellent investment.”

The Grandview Properties Park site was zoned as a comprehensive development in 2006. It includes 288,000 square feet of space that’s fully leased to Walmart, Vancouver Film Studios, Iron Age Manufacturing Ltd., Winroc, Roots and a Chevron gas station with a Triple O’s restaurant inside. There’s no undeveloped land on the property.

“We currently have no redevelopment plans,” said Kennedy. “However, the City of Vancouver’s long-term community vision for Renfrew/Collingwood does contemplate more density for the site.”

Anthem was founded 25 years ago and has more than four million square feet of commercial real estate space across British Columbia and Alberta, as well as in Sacramento, Calif. The Vancouver-based company has invested in, developed or managed — alone or in partnership — more than 210 residential, commercial and retail projects with an historical value of approximately $3.6 billion.