Eighty-five per cent of apartment residents have paid their April rent, which is better than expe... 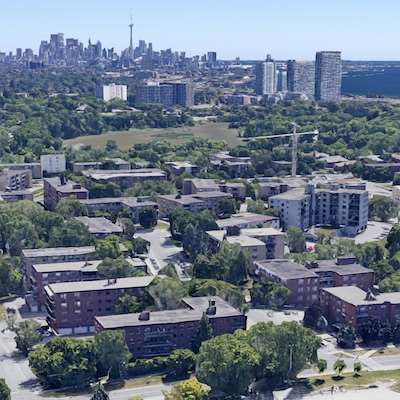 Updated information collected via SVN Rock Advisors surveys indicates 85 per cent of rental apartment dwellers had paid their April rents as of April 8. That figure was expected to rise slightly as the days progress. (Google Street View)

Eighty-five per cent of apartment residents have paid their April rent, which is better than expected, but concerns remain for May, according to surveys conducted by SVN Rock Advisors Inc., Brokerage.

CEO Derek Lobo conducted a 35-minute webinar viewed by more than 1,000 on April 9. It included more robust results and information than a similar webinar presented six days earlier that revealed 73 per cent of tenants had, at that point, made their rent payments.

Lobo expects the 85 per cent figure to creep up slightly as more April rents trickle in from people who are a bit more secure financially now than they were at the beginning of the month.

“The rent problem is a big problem but, given the amount of money that’s being given away by governments and things like that, this is not the biggest problem in the economy. But, (it’s) certainly an issue for us,” said Lobo.

“Those who could, paid.”

SVN Rock Advisors received 284 survey responses representing about 2,400 units in primary, secondary and tertiary markets across Canada from April 2 to 6. Fifty-four per cent of respondents owned five or fewer buildings and 46 per cent owned six or more.

Conclusions from the results included:

* A+ buildings with top-of-market rents, and A- and B-class buildings in higher-income neigbourhoods with plenty of seniors and pre-approved payments, saw few defaults.

* Buildings across Quebec struggled more, regardless of their age, than in any other location.

* Outside of Quebec, major markets including Toronto and Halifax had the highest rates of payment deferrals, regardless of the age of the building.

* Apartments built before 1960 collected 78 per cent of rents.

* Only five per cent of residents called in advance to notify landlords about rent payment problems.

* C-class buildings in C-class neighbourhoods suffered the most, and more than anticipated.

* Tenants with the lowest rents were at the most risk of not paying because they’re living closer to the margin with fewer savings.

“If you have two buildings, one of each, you should be deploying your resources and negotiating in the building that’s more likely to have people not paying their rent.”

Lobo reiterated landlords should review their files to look at their residents’ financial positions through such things as credit, reference and landlord checks, as well as employment letters, to get a better idea of higher-risk tenants.

The more saturated markets of Toronto, the suburban Greater Toronto Area (GTA), London and Montreal seemed to have the most difficulty in collecting rents in older buildings, according to the survey results.

SVN Rock Advisors also held more than 10 phone conversations with large apartment owners responsible for between 5,000 and 50,000 units across Canada. Their results were kept separate due to the possibility their large portfolios could skew the other results.

Lobo shared profiles and feedback from a number of these larger landlords.

The owner of public transit-oriented apartments built in the early 1970s, with about 1,000 units, typically collects 85 per cent of rents. It had collected 75 per cent by April 6.

About 20 tenants negotiated deferred payment arrangements. Lobo expects an even tougher May for this owner.

A national landlord with 15,000 units had 500 requests to defer rent and did 350 negotiations for payment plans while collecting 85 per cent of rent overall. Less than one per cent of tenants contacted management in advance.

“This is a manageable problem if you get out in front of it,” said Lobo.

An owner with a cross-Canada portfolio of 5,000 units collected 85 per cent of rents; 90 per cent in Toronto and Vancouver, but 70 per cent in Alberta and Quebec.

An owner with a diversified portfolio across the GTA, with A+, B and B- buildings, had varying results. Seventy per cent of rent, at an average of $1.75 per square foot, was paid in a non-repositioned, 1970s-built, downtown B- apartment.

Eighty-seven per cent of rent, at an average of two to three dollars a square foot, was paid in a repositioned, 1970s-built, downtown B apartment.

Ninety-five per cent of rent, at an average of more than $3.50 per square foot, was paid in a new, top-of-market, luxury A+ apartment.

The owner of a C-class building in a C-class neighbourhood, who normally collects 75 per cent of rents, received only 50 per cent for April.

Lobo said there were multiple examples of quality buildings having no rent payment issues.

Most buildings with small commercial tenants, as well as apartment units, had issues with those tenants not paying rent.

Housing leasing for post-secondary students was ahead of last year’s pace before the COVID-19 crisis, according to Lobo.

Student accommodations remain about half-full even though all schools have been closed.

Those who have stayed include international students who don’t want to return to their homeland where the COVID-19 situation may be worse, and those who are concerned about their ability to return to Canada, said Lobo.

There are also students worried they’re not going to be able to get summer jobs and don’t want to live with their parents all summer, he added.

The success of rent collection for student housing depended on management style and the expiry date for leases, but there were no real problems for April 1, according to Lobo.

There were only “a handful” of requests to renegotiate rents, Lobo said. He thinks institutional student housing owners are in good shape, but some smaller private owners who are financially stretched could feel pain down the road.

“Student housing did better than we thought, but there are headwinds there,” he said.

“There’s no summer term, so May-to-May leases are threatened. If September doesn’t happen or is delayed, that’s going to have a dramatic impact on it.”

Preparing for May 1 and the future

Lobo offered this advice to landlords to help them prepare for rent collections at the beginning of May, which is expected to be more difficult than April:

* Give some type of bonus to front-line staff members to reward them for their efforts in working with tenants.

* Don’t get dragged into public debates with tenants or tenant groups.

Lobo is confident the purpose-built apartment sector will emerge from the crisis with plenty of momentum: “New apartments are the place to be when we come out of this if you want to be in the real estate sector.”

SVN Rock Advisors will send a report with information gleaned from the surveys to all respondents on April 14. It will post its high-level conclusions on its website.

* As China reopens for business, what can Canada learn?

* Gov’t should help CRE industry ‘bridge the gap’ during pandemic