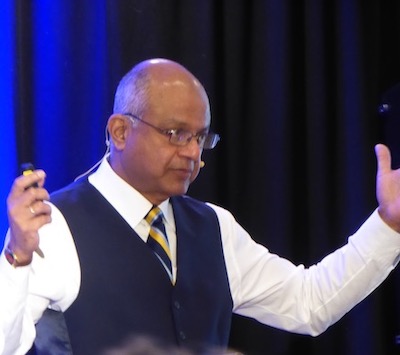 That’s how Derek Lobo, chief executive officer of SVN Rock Advisors Inc., Brokerage and founder of the AptCon 19 rental apartment development conference, opened his state of the nation address at the eighth annual event in Toronto.

After conducting hundreds of feasibility studies, Lobo recently told a large audience in the Sheraton Centre Toronto Hotel’s Provincial Theatre that Fort McMurray, Alta. is the only market in the country where you shouldn’t develop apartments.

Construction of new purpose-built apartments has undergone a revival during the past few years after about four decades of relative inactivity. Vancouver and Winnipeg have several buildings being developed, while the Kitchener, Waterloo and Cambridge region in Southwestern Ontario has become a hotbed of apartment and student housing development.

The Greater Toronto Area has 19 apartment developments, averaging 18 storeys and 223 units, under construction. Rents are reaching record rates and the market is a long way from being saturated, according to Lobo.

There were 250 apartment building transactions in Canada from 2005 to 2019, with the majority in Ontario (72), British Columbia (65), Alberta (51) and Quebec (46). Those numbers would be higher if more apartments were available.

“This business is still in its infancy and there’s lots of room to build apartments,” said Lobo. “In Canada today there are people with money in their pockets, between pension funds and institutional owners, and there’s not enough product to buy. If you build that product, the residents will come and the buyers will come.”

Lobo said there are huge opportunities for merchant apartment builders, which develop and then sell their projects, in Toronto and Vancouver.

About half of the deals between 2005 and 2019 were for apartments of fewer than 100 units. Lobo said there are plenty of buyers who would purchase smaller buildings, and in smaller markets.

What type of apartment should you build?

When considering building an apartment, Lobo said feasibility studies should be done with these thoughts in mind:

* What should you build?

* How much can you charge?

* How much will I make if I build it and sell it?

* How do I minimize the taxes paid on disposition?

Location will ultimately determine what type of product to build. While Lobo said all markets will work, developers must consider capitalization rates, land prices, buyer pool and liquidity.

While getting zoning can be done much quicker in smaller cities, they also bring liquidity challenges to merchant builders due to smaller buyer pools.

Location, unit design and size, amenities, and the property management platform drive rents. If you’re building an apartment with the intent to keep it for the long term, Lobo said, install higher-end finishes and features because you’ll have more time to pay for them.

The overall level of apartment amenities is higher in urban areas than tertiary markets and the larger the building the more amenities you can put in because they can be amortized across more units.

Getting the most from leasing

Lobo said leasing drives apartment values, but it’s a challenge to set rents on new buildings in Canada because there are few comparables. He stressed the necessity of a building owner controlling asset management and lease-up, even if using a third-party property manager, because all of the money is made at lease-up and raising rents on unit turnover.

The wrong way to lease up a building is to rent all of the lower floors first because the view premiums on higher floors were too high.

People will take lower levels if they don’t see enough value in paying more for higher floors, said Lobo, who believes the type of dynamic pricing used by airlines and hotels should also be applied to leasing up apartments.

Lobo said most developers err by leasing up their apartment too quickly; you can’t achieve top rents like that. Owners and managers can often get an extra $100 per month in rent from discretionary renters who seek particular features and are willing to pay for it, he added.

Ninety-five per cent of apartment buildings in the United States are wood-constructed buildings of up to four storeys, according to Lobo.

In areas where there’s enough land to allow it, he said these complexes can be built in phases. This way the developer can learn from each building and improve the next one. It’s also easier to lease 50 units at a time than 200 all at once, especially in secondary markets.

Twenty-plus-storey concrete buildings are expensive to build and should be the domain of pension funds, according to Lobo.

For mixed-use developments involving apartments, Lobo said the retail component should be thought of as an amenity space and not just a cash generator.

These are key points Lobo said mixed-use developers need to be aware of:

* Forgetting to recognize the cost of capital for apartments is lower.

* It’s not always about jamming the most density on the site.

* Leasing and property management is a different game when it comes to apartments and retail.

* Condominiums and rentals are different.

* You may need to give up prime retail space for a great rental entrance.

* Phasing-in on larger sites is an important consideration.

The amount of parking an apartment should offer depends on the age of potential renters and the building’s proximity to public transit.

While underground parking is very expensive and surface parking only makes sense where the land is cheap, Lobo said retired residents want covered parking and are willing to pay for it. He also noted suburban apartments with older tenants don’t need much bicycle storage.