Fifty-two per cent of renters took less than one month to find their space, according to a new rental preference survey co-sponsored by Avison Young, Informa Canada and Rentlogic to try and better understand tenant profiles and desires. 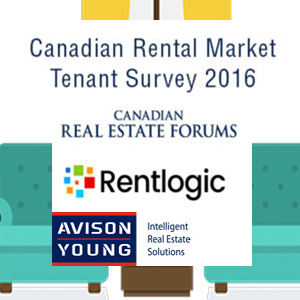 “Despite the fact that vacancy rates are so low, it turns out that it doesn’t take that long to find a unit in Canada,” said Avison Young principal and managing director of investments Amy Erixon while presenting the survey results on Sept. 7 at the Canadian Apartment Investment Conference at the Metro Toronto Convention Centre.

“That suggests that either the marketing efforts are successful or that people are quite resourceful.”

It took longer to find a place to rent in Vancouver than anywhere else, while Toronto was consistent with the national average.

Renters between the ages of 18 and 30, many of whom are students, typically spend less than a year in their rentals. Half of those aged 31 to 60 have stayed in their unit at least three years and 58 per cent of renters plan to stay where they are.

One-third of respondents’ incomes are going toward rent in Vancouver, compared to 23 per cent in Toronto and 24 per cent in the rest of Canada.

“While one-third of young renters are facing affordability challenges, the 31 to 40 bracket is not as challenged and all of the older brackets above that get more or less progressively worse,” said Erixon. “The single largest affordability problem is with the oldest Canadians.

Price is most important factor in finding a rental

Price was the most important factor in finding a rental, with 61 per cent of respondents describing it as extremely important. That was followed by location at 50 per cent, quality at 45 per cent and size at 41 per cent.

“Landlords who are making smaller units in order to provide more amenities and higher quality facilities in better locations are making the right trade-off,” said Erixon.

Eighty-four per cent of renters said it’s important to have utilities included in their rent, which isn’t good news for apartment buildings moving toward individually metered units.

“While this is an important investment by landlords to meet our climate change commitments and reduce our overall energy loads, tenants are going to resist it,” said Erixon.

Those planning to build a new apartment building should know that while about two-thirds of purpose-built rentals are primarily one-bedroom units, according to Erixon, 62 per cent of Canadians rent two-plus bedroom units. Thirty-one per cent of renters surveyed have at least one dependent.

Fifty-eight per cent of renters lived in apartment buildings, 20 per cent in houses and 17 per cent in condominiums. Apartments generally satisfy renters needing up to two bedrooms, and they move into houses if more bedrooms are required. Condos accounted for 25 per cent of rentals in Toronto and 16 per cent in Vancouver.

High-speed Internet, soundproof walls, washers and dryers in units, parking, and a patio or balcony were the most desirable building features for tenants.

The most desired amenities were an eco-friendly building, fitness centre, pool/sauna/spa, games room and housekeeping services. Guest parking was a higher priority for the youngest and oldest renters, while security was more important for older renters.

The most important thing that renters want nearby is a grocery store, followed by public transit and place of work. Schools obviously rank higher for families with children than with singles.

“Contrary to popular wisdom, which is that you need a parking space for every bedroom, particularly in Vancouver and Toronto that doesn’t seem to be the case,” said Erixon. “If you’re a landlord that has excess parking, you might want to add a service where you’re marketing those spots to others in your complex or making them available for guest parking.”

Part two of this article, “Apartment tenants want more technology,” will be published on Sept. 22.