Artscape Daniels Launchpad at City of the Arts

Toronto’s Daniels Waterfront — City of the Arts continues to roll along on the way to meeting completion target dates, and the April 21 announcement of the Artscape Daniels Launchpad is the latest step. 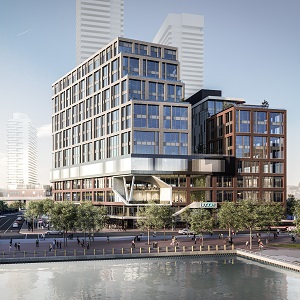 Rendering of the Daniels Waterfront South Precinct development, which will house the Artscape Daniels Launchpad hub on the Toronto waterfront.

Artscape Daniels Launchpad will be a one-stop art and design entrepreneurship hub opening in the summer of 2018. It’s designed to provide affordable access to technology and tools of the trade and offer programming, services, funding and business opportunities.

It’s named in recognition of the financial support of developer The Daniels Corporation and the John and Myrna Daniels Charitable Foundation and their leadership gift of $5.75 million.

“We appreciate the arts and think that the arts are a vital part of any community. That needs to be recognized in city-building and we’re bringing communities together. Artscape is a phenomenal partner to bring these spaces to life.”

Artscape’s head office will be located in the 30,000-square-foot Artscape Daniels Launchpad space on the fourth floor of Daniels Waterfront — City of the Arts’ mixed-use South Precinct development at the corner of Lower Jarvis Street and Queens Quay.

Artscape Daniels Launchpad will share the fourth-floor space with OCAD University’s Campus for the Connected World, while George Brown College School of Design will occupy two floors below. The Convergence Campaign, a hub for youth arts and culture non-profits The Remix Project and Manifesto, will also be neighbours.

The South Precinct will also include: four levels of underground parking; 26,000 square feet of retail space at grade, primarily occupied by food services and a Royal Bank branch; the 10-storey East Tower, with 51 office suites, and the 13-floor West Tower, with 116 office units, that comprise 130 QQE Office Condominiums.

“The spaces are being taken up quite quickly,” said Pugh. “We’ve only got a couple of floors left in the office towers and most of our retail spaces are in play.”

The development is being built to LEED core and shell certification standards. RAW Design and Rafael + Bigauskas Architects are the architects, while Quadrangle is overseeing interior design. Occupancy is scheduled for the summer of 2018.

The North Precinct of the 1.3-million-square-foot Daniels Waterfront — City of the Arts will feature: underground parking for its residential components; retail space at grade; 52,000 square feet of podium space that will likely go to another academic user; and two residential condo towers.

“We believe the community as a whole is really well-balanced from a development and planning perspective,” said Pugh. “There’s lots of life in and around the community that will be there at all times of the day and night and on weekends.”

The 516 units in the 45-storey Lighthouse West Tower are all sold well in advance of anticipated summer of 2019 occupancy.

The 36-storey, 300-unit Lighthouse East Tower, featuring layouts ranging from studios to two-bedroom-plus-den suites, went on sale over the weekend. Move-in is expected in the fall or winter of 2019.

“It was a good weekend and, although I haven’t seen all the numbers, there was a lot of activity,” Pugh said of the sales launch.

Sugar Beach North and The Yard

“We’re right at the gateway to East Bayfront and right across from Sugar Beach. We’ve got an extension of Sugar Beach called Sugar Beach North done by the same architect that did Sugar Beach, Claude Cormier. It goes across Queen’s Quay and up beside Lower Jarvis.

“The connection between the North and South Precincts is called The Yard, and that will be programmed space.”