A soaring vacancy rate in the Calgary downtown office market is forcing some landlords to be creative in attracting and retaining tenants. 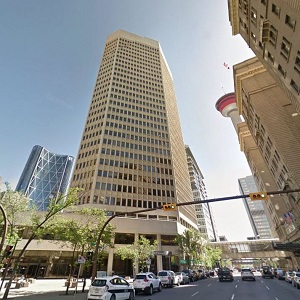 Aspen Properties, for example, is transforming the former Encana Place Tower, across the street from the Fairmont Palliser Hotel, to include a social gathering spot stocked with a beer keg, a unique area where pet owners can bring their dogs for the day and several areas for recreational activity.

Scott Hutcheson, executive chairman of the board for Aspen Properties, says the concept is to create something very different from what office skyscrapers have offered in the past.

“It’s just really fun to be working outside of the box and what we’ve all done for so many years and now to reinvent the way an office building feels has been really fun for us,” says Hutcheson.

Aspen is the owner and manager, with its investment partners, of eight office buildings in downtown Calgary and two in downtown Edmonton. The portfolio encompasses approximately 2.65 million square feet of office space and 2,327 parking stalls. The privately held company is based in Calgary.

According to commercial real estate firm Avison Young, vacancy in Calgary’s central business district rose in the second quarter of 2017 primarily due to the addition of 1.4-million-square-foot Brookfield Place. Vacancy increased to 26.4 per cent from 23.9 in the first quarter and 19.6 per cent 12 months ago.

Todd Throndson, principal and managing director of Avison Young in Calgary, says current economic conditions and weak demand for space suggest there will be no new office development announced in Calgary’s downtown core for several years.

Throndson says current rental rates are down 20 per cent to 60 per cent from two years ago.

“In difficult times, we innovate. It’s just the nature of the human being,” says Hutcheson. “With this building, we have the opportunity. It became empty in February of this year . . .

“So we determined it was time to create something very different in this market than what exists. The more creative we got, the more fun we had.”

That creativity includes a dog park on the third-floor outdoor plaza with walking, sitting and shampooing services for people’s canine friends.

Foosball, billiard and pool tables will be available as well as a 7,000-square-foot fitness facility. Half a basketball court will be located on the mechanical level on the top of the building and golf putting surfaces will be on the rooftop.

Tenants will also have access to bicycles to journey around the downtown.

The 400,000-square-foot, 28-storey tower was built in 1981 and its redevelopment will be completed by October.

A collapse in oil prices hit Calgary hard in the past two years as the city struggled through two consecutive years mired in a recession. Thousands of jobs were cut, particularly in the oilpatch whose offices are located in the city’s core.

With fewer employees, office space flooded the Calgary market, resulting in the current high vacancy rate. In contrast, the downtown vacancy rate was only 0.3 per cent in the second half of 2006.

The city’s economic reliance on the oil and gas industry is clearly evident by how downtown office vacancy has spiked since Q3 2014 when it was 6.4 per cent.

What Aspen is doing with its building may create the template for future office space in the Calgary downtown market.

“Really, what they’re trying to create with their building is a knockoff of Silicon Valley – what a lot of IT firms have done to make their environments interesting and attractive, especially for the younger demographic working force,” says Throndson. “They’re really looking at changing what an office space can do for an environment.

“That’s the most intriguing and interesting metamorphosis of an office building that I have seen in the marketplace today.”

Hutcheson says that transformation has piqued interest, with offers to lease on 50 per cent of the building it purchased two years ago with a vision to repurpose it in order to attract new tenants.

In May, it was announced San Francisco-based tech company RocketSpace would be opening its first Canadian office in the former Encana Tower in 75,000 square feet of space.

Construction on the building began in the summer of 2016. It also includes a new lobby and an indoors Plus 15 connection from the building to the nearby Bankers Court tower.