It took more than a decade to acquire the land, but the developers of a massive proposed Crosstow... 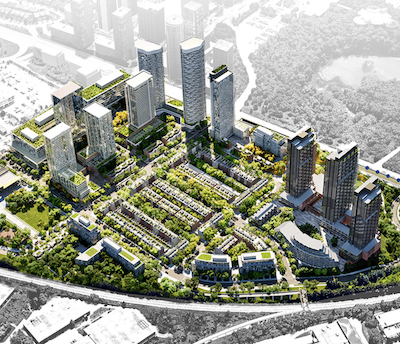 It took more than a decade to acquire the land, but the developers of a massive proposed Crosstown mixed-use project on a 60-acre site at Toronto’s Eglinton Avenue East and Don Mills Road aren’t wasting any time moving forward.

Aspen Ridge Homes released an updated proposal for the master-planned community Thursday and it is expansive: 18 contemporary condominium buildings, 30 townhome buildings, 300,000 square feet of office space, restaurants and cafes, more than five acres of parks and playgrounds, and a large community centre complete with two hockey rinks, a basketball court and a full gym.

At full buildout of the live, work and play community, Aspen Ridge says it expects more than 10,000 to be living on the property.

The company did not release any financial details with the proposals.

The site is the former Celestica Campus, and caused a major splash when the transaction was finally closed earlier this year. The sale of the site had been in the works for more than a decade.

The winning bid group comprised Aspen Ridge Homes, DG Group and Metrus Properties. The Concord, Ont.,-based companies are part of Condrain Group, which is controlled by the De Gasperis family.

The campus is on the northwest corner of Eglinton Avenue East and Don Mills, and also includes a small parcel of land on the south side of Eglinton. It has been home to approximately 1.234 million square feet of office, manufacturing and warehouse space, but much of that will be redeveloped and undergo a major intensification.

In an interview with RENX after the sale, CBRE Canada Land Services Group executive vice-president Mike Czestochowski called the site a “once-in-a-decade type of deal” due to the size, location and proximity to current and future transit.

“The master-planned community will be created and curated by the impressive team of architects and designers brought together by Aspen Ridge Homes,” reads the release issued by Aspen Ridge. “It’s a game-changer not just for the area, but for Toronto.”

The area, tucked between two branches of the Don River, is already home to the Ontario Science Centre, the Aga Khan Museum, schools and golf courses. It’s close to the numerous shopping options and dining spots of Leaside and about 10 minutes from the restaurants and nightlife at Yonge and Eglinton.

Aspen Ridge will be working with Core Architects at Crosstown. Core is the firm behind The Residences of 488 University (turning an 18-storey office tower into a 55-storey tower with office and residential space), the award-winning M City — Phase 1 project in Mississauga and the award-winning 12 Degrees on Beverley Street.

Interior design is by Mike Niven Design Inc., which designed the common spaces at E Condo at Yonge and Eglinton, and previously worked with Aspen Ridge on Studio, The Charles at Church and WEST on Niagara Street.

The landscape architect is Gustavo Maurano of the award-winning MBTW Group, which worked on the Hullmark Centre at Yonge and Sheppard, the grounds and green roofs at Bridgepoint Active Health, and the natural turf at Exhibition Place’s BMO Field.

The development of the commercial spaces is being spearheaded by Metrus, which has a portfolio of more than 15 million square feet of industrial, retail and office space.

The site rests in the Don River Valley, which for over a hundred years was an industrial hub thanks to the river and an adjacent rail line. In later years, it also benefited from proximity to the Don Valley Parkway.

In 1967, IBM opened its new headquarters there, “a fine example of mid-century modern architecture by acclaimed Canadian architect John B. Parkin” the release states. The brick-clad, four-level, 223,337-square-foot IBM building remains, and its historic silhouette will be preserved as the base of three of the Crosstown towers.

The rest of the property will be redeveloped with a blend of condo and townhouse buildings — 5,000 units and 300 units, respectively, totalling 5,300 homes. The design also includes tree-lined streets and pedestrian pathways.

Condominiums will feature one-, two- and three-bedroom suites in mid- and high-rise buildings, while townhomes will come in three types — stacked, traditional and back-to-back.

The plan will also keep existing employment in the neighbourhood. Along with the new office and commercial spaces, Celestica – currently on the site – will relocate to a new building in Crosstown.