Avigilon’s 555 Robson is on the market in Vancouver

Avigilon Corporation is transforming its 555 Robson St. headquarters in downtown Vancouver and has engaged CBRE to market it for a sale and leaseback. 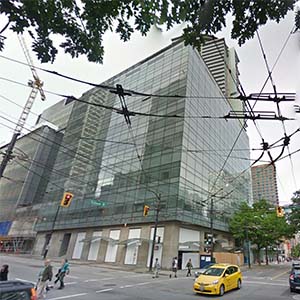 “This should be a no-brainer for a lot of people who want to get into our city or have a piece and recognize that they’re never going to get a building with this kind of infrastructure and how up to date it’s going to be from top to bottom from day one,” said Kevin Nelson, senior vice-president of CBRE’s high technology facilities group.

Avigilon purchased the nine-storey building, which was built in 1948 and previously housed Telus’ headquarters, for $42 million in November 2015.

It was stripped down to the concrete and then renovated with: 12- to 18-foot ceilings; energy-efficient windows and lighting; modern finishes; new electrical vault systems, HVAC chiller and roof-mounted diesel backup generator; a third elevator and an updating of the existing elevator cabs; a six-storey atrium featuring hanging stairways and overhead causeways; meeting rooms projected into the atrium with decks on top and LED lighting below; a bicycle service and storage room and facilities with lockers and showers.

“Their infrastructure spend is really significant,” said Nelson. “When you attach a half-a-billion-dollar covenant on a long-term lease, you’re also taking all of the risk out of the building for buyers.”

The renovations are expected to be completed in the second quarter of 2017 and 555 Robson will have approximately 135,000 square feet of available space when all is said and done.

“They’re going to make it an enviable top tech location globally,” said Nelson. “They envision it being able to attract talent to our town like a Google campus.”

The property is across the street from the CF Pacific Centre mall and fronts on Robson Street’s high-end retail strip. It’s close to many new mixed-use development sites, including the new Telus Garden and the upcoming Canada Post development, as well as Sony Pictures Imageworks, Microsoft and Amazon’s offices. The SkyTrain Canada Line and Expo/Millennium Line are nearby, and 555 Robson’s location scores 100 on both its walk and transit scores.

The building is connected to Telus Garden and an alley on its east side will feature overhead strung lighting and become a pedestrian mall connecting Robson Street to the new Glowbal restaurant on West Georgia Street. Other restaurants will include Tractor and Nosh, while there will be room for a wine bar, small retail outlets and outdoor space to host street markets and community events.

Other exterior upgrades include: a living green wall on the east side of the building; new concrete finishes; continuous glass awnings on Seymour and Robson streets; and roof screening to improve exterior sightlines for Telus Garden residents. The half-acre site also has 55 parking stalls.

With all of these improvements, it’s estimated that 555 Robson could sell for more than $100 million.

“We’ve had a continuing market appreciation, both in the way of lease rates rationalizing better NOIs, but also with cap rates continuing to compress in the city,” said Nelson of the hot Vancouver office market.

These factors contributed to Avigilon, a Vancouver-based global designer and manufacturer of security software and hardware, believing that now was the right time to capitalize.

Despite potentially tripling in price in a year-and-a-half, Nelson thinks that 555 Robson will attract widespread interest and sell quickly since it’s so difficult to get a piece of prime downtown Vancouver office space.

“Given its price point, you’re going to move beyond a lot of the strong locals. There will be institutional, offshore institutional and maybe a strong private or two that look at it, as well as some REITs.”