Chief executive officer Mark Rose describes Avison Young as a “disruptive company” in the commercial real estate industry due to its methods of doing business and unprecedented pace of growth over the past eight years. 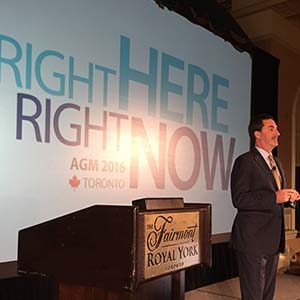 That growth is being discussed and “fine-tuning and executing strategies” is taking place this week as Canada’s largest independently owned commercial real estate services company gathers 700 of its employees for its annual general meeting at Toronto’s Fairmont Royal York Hotel.

Toronto-headquartered Avison Young has grown from 11 Canadian offices employing 200 people in 2008 to an operation that employs 2,500 in 78 offices in Canada, the United States, the United Kingdom, Germany and Mexico. The principal-managed company will announce the opening of a 79th office next week, and Rose attributes much of the company’s success to a client-centric approach to doing business and the fact that the people who help build the company reap the rewards of its growth.

“We’re not being told what to do by shareholders,” said Rose. “We have a group of people that want to work together and are aligned together because we own the company.”

Historically low interest rates hovering just above zero per cent are driving much of the real estate industry these days, according to Rose.

“As long as that continues, and it looks to us like it’s going to continue for a significant period of time, we are a real asset class, we are a profitable asset class and we are a great alternative investment to the traditional investor because we have a stability and yield. It’s very hard to find where our industry would dip except for some sort of catastrophic event, such as a terrorist attack, which we’re not expecting.

“If interest rates go up we will have a correction … If there’s a 100- or 200-point basis points increase in interest rates, that changes our market and takes values down and slows down activity. But that’s just not what’s happening and we don’t expect to see it for a considerable period of time.”

Rose is generally satisfied with Avison Young’s performance in its homeland.

Rose said most U.S. markets that Avison Young is in are also performing well, but he thinks they could see more growth.

“I’m surprised by places like Houston, which you would think would struggle because energy prices are down. But they’re OK because overall the U.S. actually wants to grow. Probably the one thing that’s keeping a lid on the U.S. is the presidential election. I expect to see something very different after the election either way. I believe that some of the fear of the unknown will leave once the election is over, which is a good thing.”

Even the U.K., which went through an economic slowdown earlier this year when it voted to leave the European Union, has bounced back.

“Fear of the unknown will stop a market in its tracks, but only in the short term,” said Rose. “So for the first half of the year people feared what a Brexit vote might be.

“There was way too much emotion and there was an exaggerated move to the down side after the vote, with most people not realizing that the fifth largest economy in the world is still the fifth largest economy in the world. You can’t stop trading with it. We’ve seen share price appreciation and stability and smart money taking advantage of a disruption in the market.”

Rose is optimistic about most commercial asset classes and is largely satisfied with their performance.

“There are clearly changes to office space usage and we’re becoming more and more efficient as we’re using technology, but as long as there’s employment growth office will have a foundation and safety net to continue to perform.

“The industrial market has been very strong because of technology. Think of the need for same day fulfillment and supply chain management that has driven a change from outdated pure warehouse space to high-tech distribution and fulfillment centres along with data centres.

“Multi-family continues to be very strong because the demographics tell you that people either can’t buy homes or are choosing not to buy homes.”

Retail in state of flux

While retail is in a state of flux due to changes in technology and uncertainty about how real estate will be used in the coming years, Rose believes the class is alive and well.

“It’s just a matter of how retailers will utilize their space. Are they going to move to smaller showrooms and bigger fulfillment centres as more and more transactions occur on the Internet? The answer is most likely ‘Yes,’ but that doesn’t put retail out of business. It’s just going to change. It may even increase square footage, but traditional showrooms and floor space may be taken up by more fulfillment space.

“How are drones delivering packages going to influence retail? Many, many retailers are preparing themselves to have same day fulfillment, sometimes within an hour. Whether it’s an online grocer or a large retailer like Amazon, these folks are disruptors and trendsetters that are forcing everyone else to adopt.”

The future of Avison Young

Rose sees no end in sight for Avison Young’s drive to secure a global presence for the company.

“It will be more of the same with more platform and more coverage around the world. You’re going to see us expanding further into Europe and you’ll ultimately see us in Asia. You’ll see us filling in any gaps that exist in terms of market coverage or service coverage.”

That process has begun already.

On Monday, Avison Young hired retail brokers Daniel Lee and Jason Schouten from Northwest Atlantic as principals. They’ll be based in Vancouver and will lead the firm’s retail practice throughout B.C. while representing the interests of various local, national and international tenants as well as landlords and investors.