While Canada’s office market was fragmented over the past year, with some cities far outperforming others, there was still almost 1.9 million square feet of positive absorption. 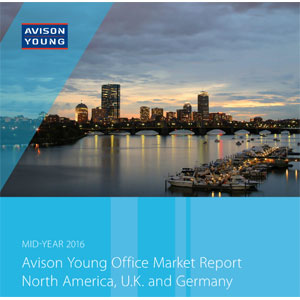 That absorption momentum may be at risk in the future, however, as new supply starts coming on the market and densification becomes a growing trend.

“As more organizations densify their premises and put more people into less space, long term there will be a measurable effect resulting in demand levels that are somewhat below the historical averages that each of the markets have been accustomed to,” said Bill Argeropoulos, principal and practice leader, research (Canada) for Avison Young.

“People have to get used to the fact that whatever that figure is, it will be somewhat lower going forward.”

Argeropoulos was referring to some of the findings contained in Avison Young’s “Mid-Year 2016 North America, U.K. and Germany Office Market Report,” which examined conditions and presented analysis for 61 cities, including 12 in Canada, for the 12 months ended June 30.

Year-over-year, Canada’s office vacancy rose in 11 markets and climbed 170 basis points to 12.1 per cent due to weak fundamentals — notably in Calgary and, to a lesser extent, in Edmonton. Winnipeg is the only city where the office vacancy rate dropped.

Canada added more than eight million square feet of new office supply from mid-year 2015 to mid-year 2016, with suburban markets slightly leading their downtown counterparts. More than half of the new inventory was added in Toronto and Calgary.

“Despite discussions about the impact of millennials on urbanization and the rebirth of the city, we still have a significant amount of development happening in the suburbs,” said Argeropoulos.

More than 16 million square feet of office space is under construction in Canada, with 56 per cent of it pre-leased. Downtown projects are doubling those in the suburbs in terms of size. Calgary and Toronto again lead the way, with notable development also underway in Vancouver, Edmonton and Montreal.

“Outside of Calgary and what’s happening there, I think the current construction levels are manageable in our marketplace because so far demand has kept pace and I think our pre-leasing levels are such that we are confident,” said Argeropoulos.

“The mere fact that we’re building what we’re building, given our somewhat lacklustre economic conditions and labour numbers, shows the confidence of the development community and that it’s looking beyond whatever bumps may be in the road ahead.”

“There are instances where transactions are being done, be it new deals or renewals, where the rents are still at or above market value,” said Argeropoulos. “There are other situations in adjacent sub-markets where a building has near-term rollover and there are certain tenants who may want to expand and the landlord doesn’t have the space that will experience some vacancy. In those cases, rents will soften.

“In the near term, Canada-wide, I think that rents might soften a little bit, but each market commands its own rental structure and it’s still quite fragmented.”