The commercial real estate investment market in the National Capital is poised for a “banner year” in 2017, according to the CBRE Ottawa Market Outlook. 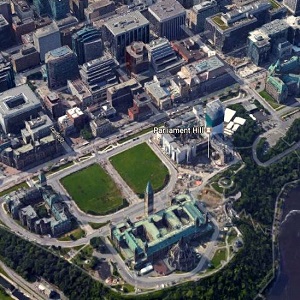 Parliament Hill and a portion of downtown Ottawa.      (Google Maps)

But many building owners – or purchasers with plans to redevelop — in the city have some work ahead if they want to capitalize on Ottawa’s large, and rapidly growing, tech sector.

It’s the largest downtown tenant outside of federal government agencies, and poised to continue to expand if businesses can find suitable space.

During CBRE’s outlook event on May 9, managing director Shawn Hamilton and vice-president of CBRE Ottawa’s national investment team Nico Zentil said they expect almost $1.4 billion in transactions in 2017, which would make it one of the city’s three most active years on record.

Zentil said in the past 18 months the city has experienced more investment activity, and more buildings for sale, than in the previous five years combined.

Yet despite government growth and an expanding tech industry, some of the city’s vacancy rates have actually increased.

“Right now if you were to say ‘Where is the softness is our market, and the opportunity for growth in our market?’ — outside of new development that has a timeline and a price that might not be attractive to highly mobile and agile tenants — we’ve got B- and C-class buildings in our downtown core that have vacancy rates hovering above 20 per cent,” Hamilton told RENX in an interview following the event.

“That represents about an 18-year high.”

The problem, Hamilton says, is these buildings need retrofits or upgrades to meet the standards many emerging companies expect from their workspaces.

“I mean, these are buildings that were built 40 to 60 years ago for government employees. (They) do little to appeal to the modern, hip, demanding workforce of today. So there is a bit of a disconnect between the product we have available and the type of person in a new age economy business.

Hamilton said there is a “stalemate” of sorts among some of the region’s building owners. They’re playing a wait-and-see game to determine if government clients, or organizations related to governments, will continue to renew leases.

But he points out the federal government’s Workplace 2.0 initiative aims to reduce the footprint of each worker by 22 per cent. And, a recent round of government expansion by about 9,000 workers fit into existing space, with no new significant leasing.

That makes government a “stable industry, but not a growth industry” for owners of commercial real estate.

That fact highlights the need to upgrade and modernize older office buildings and spaces. Hamilton expects a mix of existing owners and new owners will take on these tasks.

“Some will and some won’t,” he explained. “Some (owners) will because they have the vision and the funds and they have had some time to soften up and recognize that the federal government is not coming back.

“But I do feel there will be some (owners), who even if they have the vision, might not have the funds.

“They may look to sell in order to pass that opportunity on to somebody else.”

This could attract outside investment. Hamilton said with cap rates being compressed in hot Canadian markets such as Toronto or Vancouver, investors are looking elsewhere for better returns.

“Ottawa is becoming a very attractive market because it is stable, and it is a primary Canadian market.”

Hamilton believes this can be a good thing for the market – because more high-quality space is going to be needed.

The edge of the tech wedge in Ottawa these days is Shopify (SHOP-T), a rapidly expanding, homegrown company that has become an international ecommerce leader.

Shopify has just made plans for another massive expansion in Ottawa.

“On the heels of that, I think there will be spinoff. It will wake other companies up that might not be in Ottawa, because Shopify is a name that carries some weight now outside of Ottawa.

“They will say ‘What’s going on in Ottawa that they would choose to have almost half a million square feet here?’ I think what’s good for them will be good for others.”

In addition to suitable office space, public transportation is a big driver for tech hubs. Ottawa’s LRT system is to open Stage 1 in 2018, followed by Stage 2 in the early 2020s.

The downtown stations are already creating activity around these nodes. Hamilton cited Place de Ville, Sun Life Financial Centre, World Exchange Plaza and CF Rideau Centre all investing in upgrades which he doesn’t think are “coincidental to the timing of the LRT.”

“It will be transformative by Ottawa standards to our downtown core.”

Which, he believes, adds to the opportunities for owners who move quickly to upgrade their properties.

“My view is the organization or landlord who does it first, will be the one who benefits most.”