Just an hour’s drive north of Toronto (or 45 minutes from Toronto’s Pearson Airport on the days when cottagers aren’t clogging the 400 highway), the  City of Barrie commercial real estate is benefitting from the good times for CRE in the greater Toronto area. 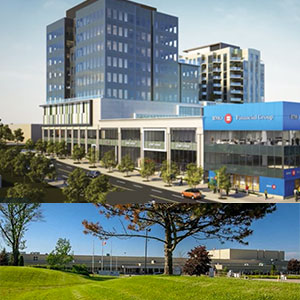 “Barrie is kind of a dynamic market, it is a growing market both on the business side and on the residential side,” said Max Smirnis, a vice-president with CBRE Canada.

The brokerage knows the Barrie market well and currently has mandates for the city’s largest industrial facility and its biggest office development.

Perhaps the main draw for Barrie is the relative bargain it represents for tenants, with occupancy costs about 20% lower than the GTA, the CBRE executive estimated.

It also exhibits some GTA-like characteristics.

“We are seeing some of the same trends in terms of lack of product that is available for sale, lease in all sizes. There is a huge appetite for ownership across the GTA for commercial buildings, the same can be said for Barrie. Money is cheap and buildings are a little less in value than in the GTA but there just isn’t enough product in an approximately 12 million square foot market.”

Boosting the prospects for Barrie is a growth spurt in the town of Innisfil directly to the south. New water and sewage hookups in 2018, “is going to open up a lot of industrial lands along the 400 corridor to encourage business growth. So we are seeing a lot of infrastructure plans with the 400 being expanded as well.”

As well, Barrie is garnering a reputation as a tech corridor with data centers and tech multinationals setting up shop there.

“One thing that they like is not only the low occupancy costs but that South Simcoe region labor pool is tremendous.”

The industrial market is poised for growth in Barrie, in part due to soon to be rising development charges that will impact future industrial growth there.

“This is a good time to take advantage of the lower DC rates for developing industrial,” said Andy Suhr, a CBRE sales rep.

“In industrial, there definitely is land available, I know of six existing businesses in Barrie that are doing big additions to their properties, 50,000 to 60,000 sq. ft. and three are actually building new buildings in the Barrie market place.”

The current seller, operating in the packaging industry, has been using the facility mainly as a warehouse, but it could support major manufacturers and is zoned heavy industrial

“It has extremely heavy power, a huge water supply, it was built as a manufacturing plant,” said Suhr.

CBRE is positioning the property as a distribution facility or as a manufacturing site.

The current owner takes up about one-quarter of the facility and wants to continue using the space in either a sale or lease, which speaks to the conditions of the Barrie market.

“He would still like to occupy some of the space because with the growth of Barrie there are limited options in that 100,000 to 200,000 sq. ft. size,” said Smirnis.

He is betting that a buyer will convert the existing building into a multi-tenant property.

CBRE has another industrial listing, 200 Fairview Rd., a four-tenant, 310,000 sq. ft. building for. “We have a lot of interest from institutional buyers and pension funds on that one,” said Smirnis.

“I think when you look at the cap rates in the GTA with the strong tenant roster, you can get about a point better deal up in Barrie in terms of cap rate (6.5 to 7% versus around 6% in the GTA).”

The almost-completed project, which was headed by Mady Developments before the company sought creditor protection, is now in the hands of Fortress Real Developments Inc.

“It is definitely redefining office space for Barrie so it is taking some time to have the local office community adjust and understand what it is and where we stand and where we are in terms of rates,” said Suhr.

To add to the challenge, office vacancy rates for Barrie are in the 14% range, CBRE estimates.